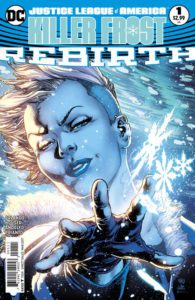 After weeks of passionate character introductions, Steve Orlando delivers another stand alone title to introduce another member of the Justice League of America. Orlando teams up with Jody Houser again to spend time transitioning Killer Frost, Caitlin Snow, from prisoner to JLA member. Orlando and Houser co-wrote the powerful Vixen stand alone issue and here they again tackle a strong female character. Unlike Vixen, Killer Frost has spent more time in the spotlight, both on the pages of comics and on television screens. In fact, Killer Frost plays a key role in this week’s Justice League vs. Suicide Squad #6 where she teams up with future JLA teammates Batman and Lobo to shut down a major plot point. This one-shot serves as a narrative bridge for Caitlin Frost as she tries to move forward out of Amanda Waller’s control.

The last three stand alone Justice League of America Rebirth issues told very personal stories that connected readers emotionally with these lower profile characters. Orlando and Houser’s treatment of Vixen created a strong and determined lead that was finally ready to stand up against the hate and evil she’s seen in her life. The Ray told a coming out parallel about a hero who gained confidence in who he was. On first glance, JLA: Killer Frost is a more straightforward super villain turned hero tale.While readers are more 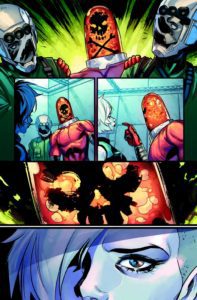 familiar with Killer Frost’s character, the same themes of personal discovery and empowerment that ran through the other one-shots run through this issue as well. Killer Frost is fighting the perceptions of others and the roles and limitations that someone, Amanda Waller, puts on her. She is fighting against her own urges to be the person that she wants to be. Caitlin Snow is actively making decisions based on the person she wants to be and not allowing how others see her to prevent these changes. The message of empowerment and not allowing others dictate who a person is, are more subtle in this issue, but Orlando and Houser continue their stories of personal growth.

Beyond these themes, the narrative here provides some hints at future conflicts. Killer Frost still has a need to feed on heat and when and how Batman will discover this could create some conflict points for this new team. Overall, while this issue is not as overtly warm and empowering as the other JLA:Rebirth titles there is more to Killer Frost than her chilled exterior.

A successful transition from Killer Frost’s role in Justice League vs. Suicide Squad into her new role on the Justice League of America. Caitlin Snow’s internal battle to fight against the prejudice and judgment of others and set her own future continues the empowerment themes that Orlando and Houser created with each of these JLA:Rebirth one-shots.