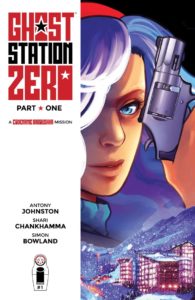 The Cold War ended almost 30 years ago, but that does not mean the tensions have been resolved.  The state of geopolitical tension that began after World War II was between the Eastern and Western Blocs.  The (now former) Soviet Union was attempting to expand its powers but countries such as the United States and England wanted to stop them in their tracks.  This setting is the backdrop to many novels and films.  Most of the media shows us brave men saving the day.  Ghost Station Zero gives us a different kind of lead character.

Her code name is Baboushka and she is a, how can I put this… crime boss turned blackmailed international super spy.  Basically, she is the definition of badass!  Baboushka is the last scion of the House of Malikov.  She came to the USA three years ago claiming political asylum when the Russian 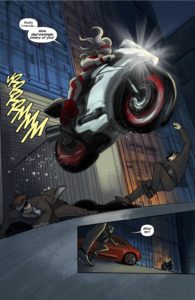 Federation began to back her rival gang members.  Her true identity remains a mystery, but at least we know she is on our side.  With the help of her bodyguard, Gyorgy, she is on a new mission, to find the Ghost Stations.  These were abandoned Soviet bases from the Cold War, long forgotten and useless…or so people think!

The art that Shari Chankhamma brings to the page is gorgeous!  While Antony Johnston gives us a James Bond-esqe story, Shari gives us the universe it belongs in.  While this mission is set in the hear and now, there is a futuristic beauty to it.  I felt like I was reading through a high-end animation.  Even the more “gruesome” scenes of murder and worth admiring.  This is my first time with Baboushka, but I will be going back and looking at past issues now.  This comic is a treat for the mind and the eyes.