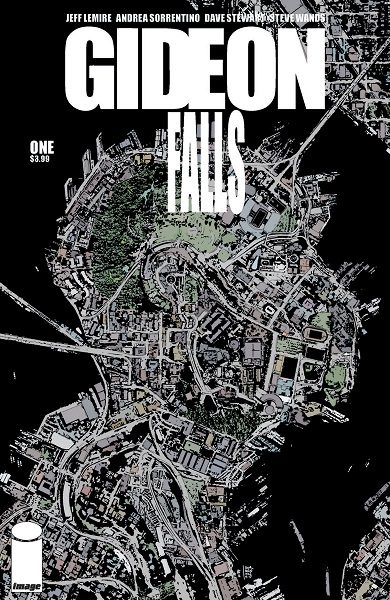 I really had no knowledge of what this new series by Jeff Lemire and Andrea Sorrentino was going to be about. All I knew was that I had to read it as I am a fan of this duo, especially their recent work on Old Man Logan. Now that they’re back together, they’ve brought us Gideon Falls. The story takes place in a small town with as a new priest enters due to the previous one no longer being among the living. If you’re familiar with Sorrentino’s art, you’ll know that his style can bring a certain type of grittiness to the story. It helps set the mood in a place where not everything is all that it seems. Or at the very least, something terrible is going on but you just don’t know what. Father Wilfred seems to be a bit of a troubled person himself as he takes a drink right when he is about to drive into Gideon Falls. We don’t know anything about the town yet but they seem to always look up to the leader of their church.

Have you seen this:
Blue and Gold #1 (REVIEW)

On the other side of our story, we’re introduced to Norton who seems to have some trouble with an obsession of digging through an unknown city’s garbage for certain items. He seems to have had mental problems but is able to live on his own for now. All you feel from him as you read is this sense of sadness, loneliness, depression, loss, and paranoia. Lemire does a great job of allowing the reader to be so invested with Norton as you both feel a bit lost but see the pieces of some sort of puzzle coming together. The big question for me though was, what does he have to do with Gideon Falls, seeing that he’s in some sort of large city and we’re not sure how far away it is from the small town. By the end of the first issue, we are given a hint of what will bring our characters together later down the road but we don’t understand the significance of it, yet.

Gideon Falls seems to be about people that are just lost in their lives and are about to face something incredibly challenging, the type of story Lemire seems to excel at. The difference is that Norton is looking for it, while Father Wilfred is just stumbling upon it and will more than likely dig deeper into it as his whole situation unfolds. The issue can leave you feeling a bit lost but I imagine that is all part of the plan for the bigger picture. Gideon Falls is great opening as I am gripped by our characters situations and anticipate what will happen next.