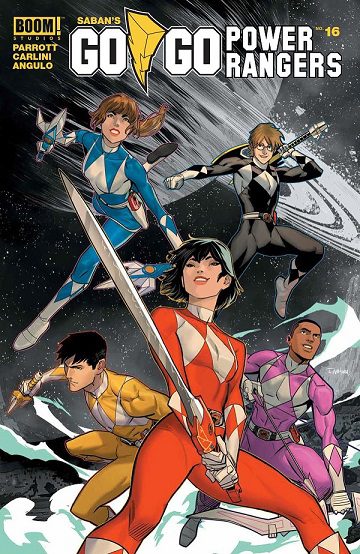 We’re at the end of another arc with the latest issue of Go Go Power Rangers. This time the rest of the team joins in to assist Jason and Trini as they try to uncover what her next plan is on the alien planet Breel. When the action starts, it’s nothing but fun quips and exciting since it’s been a few months since we seen the team together. What make’s it even more enjoyable is the color swapping that occurs with Zack, Kimberly, and Billy when they arrive at Breel. The self-awareness on some of the things with Power Rangers is also great such as using of weapons that belong to their teammates. Not only do we continue to see how the creative team fully embrace the tropes of Power Rangers, but they continue to also have fun with it as everyone follows Trini’s orders as she dawns the red ranger mantle. The fighting from the Rangers never really gets to Rita and is very brief with Adriyel who decides to take things into her own hands but that doesn’t take away from enjoying all the action we do get.

Go Go Power Rangers is not all about the action though, this series has really done a fine job adding layers to our team with the personal problems they face along with the typical teenager problems such as dating. There’s a great moment with Bulk confronting Kimberly because of how much he cares about his friend and the big thing that needs to be talked about is with Jason and Trini. I love the way it’s being handled with these two right now and it seems like they will be moving forward with this relationship. The steps may be small but this was also something that could’ve easily been swept under the rug and written off as a spur of the moment deal because of the stressful situation the two were in.

The art team continues to be on point in this series. This is still some of the best work I see every month in comics. Every aspect shows that a lot of hard work is being done here from the illustrations, fantastic inking, and the colors. All of this combined just makes everything eye-catching. They also make great work with panels, especially in its action panels with a fantastic splash page where the rangers use one of their big weapons. Go Go Power Rangers keeps up it’s great pace of action and drama that just makes enjoy all of it’s heroes and villains. Most importantly, they close another chapter in the series while leading off readers to get excited as they setup to begin their next arc.