My taste for manga runs the gamut. I mostly gravitate towards action oriented series, but I do love me a good slice of life story. Occasionally, I’ll dip my toes in a sports manga. Rarely do I go for timepieces, at least ones that stay true to historical elements. Golden Kamuy, however, is one series I’ve quickly become deeply invested in. While I am a lover of history, I don’t know much about Japanese history. Lo and behold, after the first issue, I was hooked.

The story introduces us to Saichi Sugimoto, a young man caught in the throes of war and staring death in the face during his first battle. His first encounter with death takes place during the Battle of 203 meter hill; a natural, strategical hill in Port Arthur, China that was fortified by the Russians during the Russo-Japanese War in the early 1900’s. The battle itself was one of the most hard-fought and decisive fights during the entire siege of Port Arthur. It was considered one of the most highly fortified positions of its time, which made for a literal uphill battle for the Japanese 1st Division; the same division our resilient protagonist serves in.

Saichi suffers quite the wound during this battle, to the point that when I saw it, I thought “okay this dude is dead, and maybe he makes a deal with Death to stay alive”. I honestly thought it was going to be one of those stories. I was wrong. Saichi just keeps going, murdering anyone in his path. From his battles throughout the conflict, he earns the title of “Immortal Sugimoto”. No deal with death, no supernatural stuff. No, this guy is an unnatural bad ass; plain and simple.

Have you seen this:
Best Gift Items For a Game of Thrones Fan

Fast forward from the war, Sugimoto finds himself panning for gold alongside an old man in Hokkaido. There, the old man tells him the a story of a clan who planned to overthrow the Japanese government, a lone samurai set against them, and a mountain of gold hidden somewhere in the mountains. Intrigued, Sugimoto finds himself locking horns with death once again in order to find the hidden gold that could solve his financial woes 5 lives over. For the comic inclined, Sugimoto has quite a bit of Wolverine qualities; a tenacity to survive, a rough exterior towards strangers, and a tendency to find himself in wild predicaments. Oh, let’s not forget his young, female apprentice who is a force to be reckoned with.

Through his journey, he befriends an Ainu girl named Asirpa, an indigenous native with a coincidental connection to the hidden gold. Together, they make for an incredibly smart odd-couple who compliment each other’s short comings. The two come across strange bedfellows and strong enemies that make their journey together that much more entertaining. Sprinkled with bits of comedy, goofy faces when the tone merits it, and vividly visceral violence at just about every turn, Golden Kamuy wonderfully strides through pacing like clockwork. There’s never a dull moment in this book, and there’s always something to absorb from each panel. Those with a keen eye will definitely get a treat out of this series. 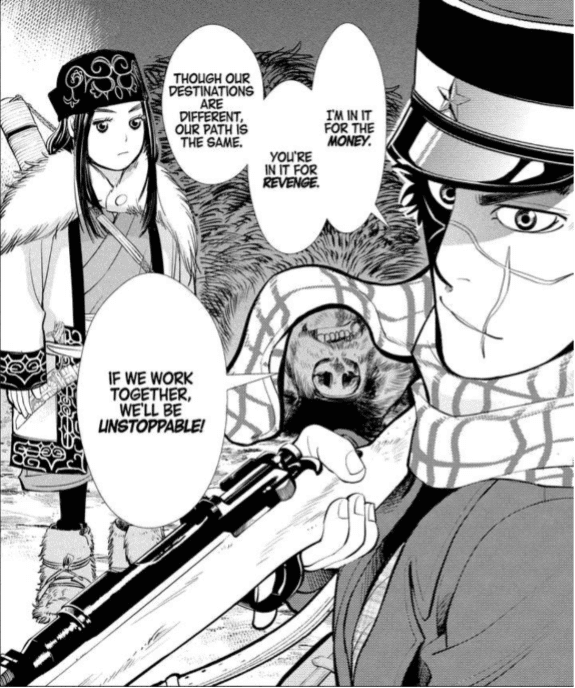 Golden Kamuy is a high recommend from me. The art is fantastically well-detailed, there’s historical accuracy, I believe to the point that there is an Ainu language linguist on payroll to ensure accuracy within the series. Little fact: there are estimated to be only a few thousand Ainu left in Japan. That level of detail just gets me even more motivated to get lost in this series, and so should you. Don’t even get me started on the story. It starts off a bit basic, but it picks up like a ’68 Camaro with a 350 big block. There’s a bit of focus on characterization, and it gives the story that extra meat to make the progression more savory. No reason to wait, get it before that money burns a hole in your wallet.