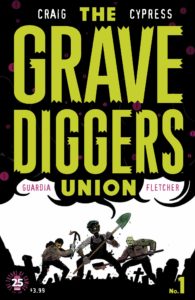 In a world where zombie and ghoul attacks are treated like a pest problem or natural disaster, gravediggers work to put those bodies back in the ground. Unfortunately, the group’s leader Cole feels the worst has yet to come and must reach out to his estranged daughter.

I’m always up for a comedic horror story, but there was more to this comic book than expected. The beginning was a trippy look at the origin of the comic books world. The Lovecraftian-like monsters were creepy as hell. The whole world-building as a whole was excellent. It’s a hard sell to make zombie attacks and “ghost-storms,” feel like an ordinary part of the characters lives, but this issue accomplished just that. The grizzled union leaders Cole and Ortiz, were very interesting characters and they didn’t fit the archetype for a heroic character. This was a really fun new comic series. 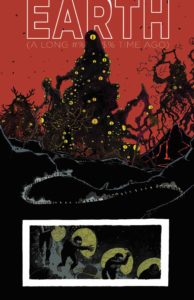 The dealing with bureaucrats and censored cursing was pretty funny. There was a cheap line where a Rook asks if Cole and Ortiz were making out, it felt unnecessary, but for the most part, I enjoyed the humor.

As stated earlier, Lovecraft monsters and their monkey slaves were creepy. Wes Craig’s artwork in the first few pages were great but Toby Cypress’ stylized art really fit the rest of the rest of the book. The monsters look scary but still leave room for a bit of levity. The colors added a lot too. but I admit, I wasn’t a huge fan of the red ghost effect overlay, but that is a minor complaint.

I randomly picked up this comic to try and was pleasantly surprised, it was great. I’m honestly excited to see where this goes. The mystery behind Cole’s daughter Morphea was sure to bring me back no matter what. There are a ton of monster hunting comics out right now but none like The Grave Diggers Union, it really set itself apart.