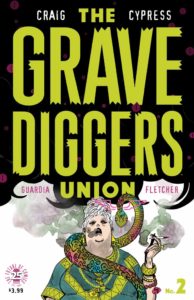 Ortiz and Haley join Cole in tracking down his estranged daughter Morgan, who is a prophet of the cult Black Temple. They turn to a psychic and an old friend of Cole’s who has already tangled with the group.

Despite not being as action-packed as the last, this issue set up its antagonists quite well. The Black Temple cult being made up of a bunch of old rich men craving more power is fitting. Cole’s old psychic friend Morphea was an interesting character, though her speech pattern was driving me crazy. With that said, the lore being built doesn’t stray too far from the conventional, but the Dark and Light gods flashbacks have been my favorite part of the comic so far. 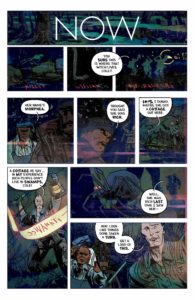 As previously stated, I really love the Wes Craig art portion of the comic at the beginning. The gods have a really cool design. Toby Cypress does the majority of the art and each panel he does is so full of life. He doesn’t waste any space and keeps the story intriguing even when characters are just sitting down having a conversation. The way Niko Guardia’s colors whirled on the page really stood out. It’s a wonderful looking issue.

Have you seen this:
Spawn News: The Scorched writer Sean Lewis joins TLDR

The world Wes Craig and Toby Cypress have created is absolutely bonkers, but really entertaining. It never takes itself too seriously which hits a perfect tone that allows it to go for a crazier concept. I’m really excited to see what becomes of these characters and this story.