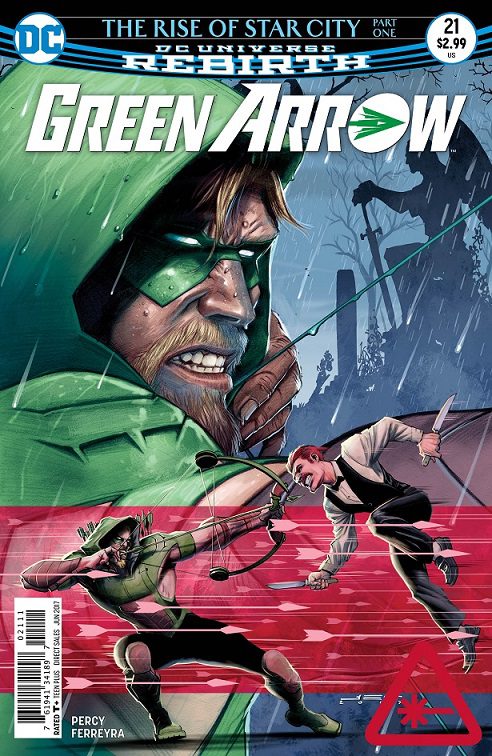 As usual, the setting of this chapter of Green Arrow takes place in Seattle, WA where Green Arrow is visiting the Evergreen Cemetery grave site of his deceased father. It is pouring rain in a shot that is reminiscent of Nightwing Rebirth’s cover. It seems to be a torrential downpour as the scene cuts away to the villainess Cheshire who is at the Seattle-Tacoma International Airport. She is there to plant explosives on flight 733. Throughout the next few pages we see Cheshire’s plan come to fruition; former Green Arrow ally, Eddie Fyers emerging as a villain; Danny Brickwell pounding the foundation of a building, and Mayor Nate Domini using unscrupulous tactics to get what he wants. Green Arrow spends most of the issue at the cemetery pondering his upbringing and relationship with his father. The issue wraps up with Green Arrow standing at a mausoleum in the rain soaked cemetery. Green Arrow pulls on one of the Cherub’s arrows, which opens a secret doorway into the mausoleum. This I infer is his secret hideout now that he is a wanted man by law enforcement ever since he allegedly killed former Chief Westberg. Someone sinister is pulling the strings in this issue by forming a faction with the four criminals previously mentioned. It stands to reason that it is either the Great White Whale or Cyrus Broderick, the latter being Queen Industries Former Chief Finance Officer.

Have you seen this:
A Pretty Odd Bunny (review)

Benjamin Percy does it once again with a wonderful job writing Green Arrow. We get to see Green Arrow do a little soul searching in the cemetery as he talks to himself. 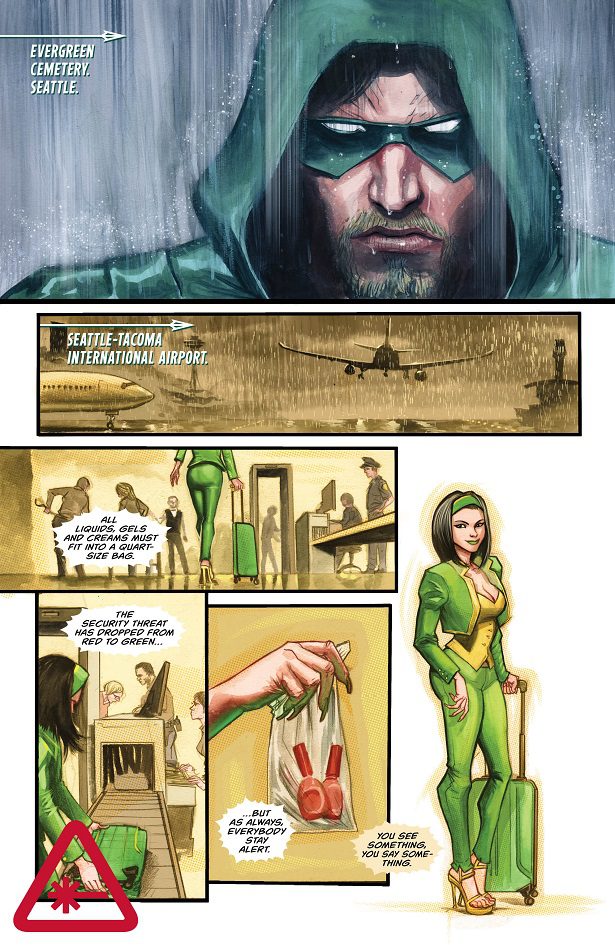 I believe the main emphasis of this issue was to set up a new storyline as the title suggest, alluding to the fact that this is not a continuation from the last issue directly. Being a part one in a story arc, Benjamin Percy sets up Green Arrows future adversaries quite well in that each of the four was given a good amount of time showing what they can do, notwithstanding Eddie Fyers, which I am not sure what his deal is yet. My impression of the plot-line itself is one marked with cutaway and a feeling that the issue’s villains lacked a certain amount of credibility going into the issue, which I hope they have towards the end of the story arc. Green Arrow doesn’t shoot one single arrow or kick anyone’s ass in this issue. Action got the short shrift in this issue, but the dialogue makes up for it in the long run.

Have you seen this:
Knighted #1  (REVIEW)

Easily my favorite new character would have to be Cheshire, especially since after watching Young Justice where she is featured heavily. Danny “Brick” Brickwell is a character that I haven’t seen or heard of much other than Vinnie Jones playing him in the Arrow TV show. Juan Ferreyra’s art within this issue is nicely done with particular attention given to the rain and the plane crash which are both extremely well detailed. I found it interesting about how much detail could be given to the rain and plane crash and how little detail he put into Cheshire in her opening scene, yet still made the character look great.

The art and storytelling have always hooked me into reading Green Arrow and this new story arc is no different.