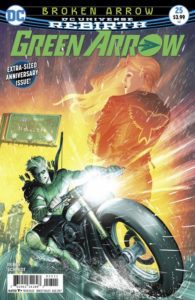 25th issues often are seen as milestones. They can be a way to wrap up a plot line or kick off a new direction. They frequently are used as a way to bring readers into or back to a series. Green Arrow #25 certainly tries to hit those marketing points by kicking off a new storyline and direction, while catching readers up on what has happened in previous issues. Benjamin Percy’s Green Arrow is successful at this, but it does not make it a successful storyline.

Issue #24 wrapped up with a confrontation with the villain of the past 24 issues, the destruction of Seattle, the re-branding of Star City, and Oliver Queen revealing to the world that he is alive (For more details check our excellent review). Issue #25 takes place at some point in time after the end of the last issue. Oliver is in custody, the team is scattered, Star City is building, and Cyrus Broderick is back and completely healed. Each of these situations raises more questions than Percy is currently answering. This reduces the weight and significance of the confrontation between Oliver and Cyrus from the last issue as Broderick is back to normal. Oliver’s arrest and pending trial is scripted well and his approach to seeking justice through the courts is logical for someone with a secret identity. Unfortunately, that logic is dismissed at the end of the issue as Oliver skips bail to track down the pending threat as the Green Arrow.

This issue removes much of the impact of previous events. An attack in Seattle that brought down the Space 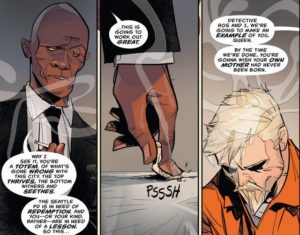 Needle, an attempt to create a corporate city, and the demolishing of lower class neighbors are all accepted as quick facts and moved on from. On one hand, Percy is requiring readers to pretend that the rest of the nation, the government, or the media would do nothing in this situation. Worse though is the missed opportunity to say more about any of these events. Percy has frequently taken the opportunity to interject social commentary throughout his run on this series and to not spend more time on these events lessens the impact and significance that he has built around the Green Arrow during this past year.

For readers coming back to the series, issue #25 is an excellent catch-up piece. Readers get a number of recapped events and sets the heroes onto a new storyline. Percy has taken the Green Arrow and readers on a ride over the past year and this track record provides hope as the Green Arrow sets out for a road trip.

Have you seen this:
STAR WARS INSIDER: THE FICTION COLLECTION VOLUME 2 (REVIEW)

Benjamin Percy creates a fine jumping off point for a new storyline, but in doing so he reduces the significance of the characters and events his previous arc. While there’s plenty of questions keep readers coming back, there is a disregard for readers that invested in this series over the last year.