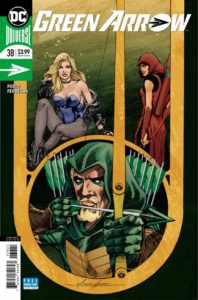 Green Arrow #38 is Benjamin Percy’s final issue in the series and it has been quite the wild ride. We finally come to the end of one of Oliver’s biggest journey’s as he steps into a courtroom to try and win a case that has all evidence pointing against him. I absolutely love how Oliver handles himself in the courtroom here, first off by paying his lawyer Kate who was crazy enough to bet all she had on this case. He always promised her that he would pay and doing so before the court started was a great gesture on his part regardless if he were to be found innocent or guilty.

The issue continues on giving great payoffs for any reader that has been on the adventure since the Rebirth era launched back in 2016. Oliver gets a tremendous amount of help from the Justice League, Dinah finally has a new song written and many issues that have been brought to Oliver’s attention finally get some type of resolve. The art from Juan Ferreyra is still a big highlight in the issue along with Percy’s writing for these characters. I have loved his depiction of these characters, the expressions he gives them, and the coloring is magnificent. Ending it all with a couple of fantastic splash pages that will leave readers smiling, especially the final page. 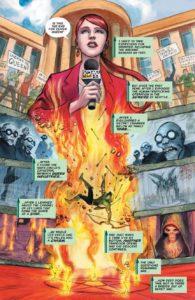 The biggest focus of this issue is how much Oliver has grown as a person and as a vigilante. With all the events that have occurred to him since issue #1, he has certainly kept his promises. I love how even after losing everything for what seemed like a long time, he never gave up hope on himself and neither did his teammates. He’s learned to work with others better and to a much larger effect compared to his solo adventuring. These hard times though seemed to also teach him how he could help his community outside of his costume. I feel as he finally has learned that he can truly save his city not only as the Green Arrow but also as Oliver Queen. While the issue doesn’t close all doors on the enemies he has faced. He certainly has grown into becoming a better person, member of his community, and a hero. His adventures are far from over and Oliver is far more than ready to face them head-on as the Green Arrow and he is not alone.