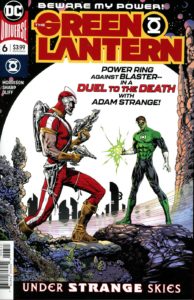 Hal is faced with a hard decision left over from the previous issue. Does he kill Adam Strange to stay undercover or save him? This is the hard choice that faces Hal as he is used to not following orders from the Guardians.

Morrison so far has been able to rein in the existential writing that he has become known for in his DC books. There are glimpses of it in this issue, but it is used to help move and develop the story. This is most evident when Mu is explaining the Blackstar’s plan and is able to blend his existential style with a standard story.

Sharp’s art maintains the high standard we have seen since issue #1. We see it again with the emotions between Hal and Adam Strange in their duel. The changing of location or scenery doesn’t deter Sharp from being able to deliver consistently.

Overall the pacing and theme of the story has been consistent overall. You can notice that Sharp and Morrison like to teeter on existential themes and normal ones. With the introduction of Adam Strange, it felt like it would tip too much one way, but overall they kept it balanced.