It’s training day for the newest members of the Green Lantern Corps. Although Jessica Cruz and Simon Baz have had success both on their own and as members of the Justice League, they are still raw recruits in the eyes of Corps Leader John Stewart. Stewart has decided that they both need more training in how to wield the awesome power that they possess and he decides to split them up. Simon has been matched with Kyle Rayner and Jessica has been saddled with Guy Gardner. While Simon thinks that his training will be relatively easy (All he has to do is land one punch on Kyle) the reality of his lack of imagination, especially in his constructs serve as a liability to completing the simple task. 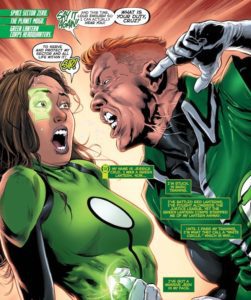 Jessica, of course, has it much worse. She has to deal with the constant yelling and insults from the surliest Green Lantern there is in Guy. I’ve never been a huge fan of Guy as a character but this series has continued to help me respect how tough he is and his inability to give up. Those qualities make him the perfect person to toughen Jessica up by pushing her emotionally. Kyle is also the perfect person to teach Simon that even though he has the will to be a Green Lantern, he is still lacking in imagination, innovation, and skill. While the Lanterns train to take on new threats, the one in their midst is raiding the archives of Rami the exiled Guardian. The knowledge he gains there will have repercussions as Volthoom discovers that his ticket home might be in the seven original Green Lantern rings.

I really enjoyed this issue. Sam Humphries did an excellent job of getting to the emotional heart of these characters. I enjoyed who he decided to pair off Simon and Jessica with and their training scenes were excellent. Eduardo Pansica’s art is well done and continues to consistently capture the power of the Green Lanterns. 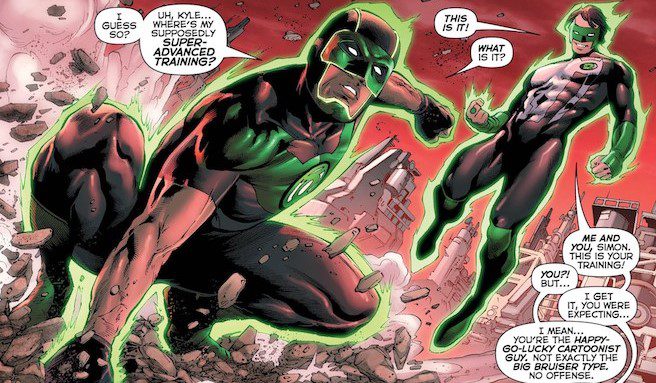