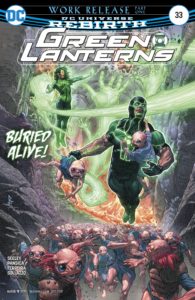 Simon Baz and Jessica Cruz are being called into action by John Stewart. A star is about to go supernova and a race of subterranean life has been discovered on the only inhabitable planet in its solar system. The Lanterns are tasked with evacuating the creatures. As the pair get ready for action, Jessica recalls her last session with her therapist where she lays out that Jessica is ready to move forward in her life and get a real job. Jessica’s confidence is evident as the pair make their way through the magma to get to the creatures below. 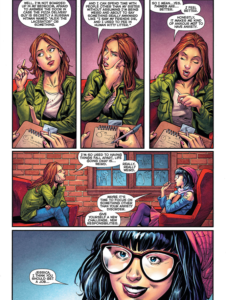 Meanwhile, Simon and his sister cannot see eye to eye on the fact that he continues to neglect chores around the house and uses his membership in the Justice League as an excuse. She gives him an ultimatum; get a job or get out. In the present, Simon is having a hard time convincing the leader of the Molites to let his people be evacuated as they have chosen to perish along with the planet that has sustained them. As the world continues to crumble around them, it is getting harder and harder to convince them to leave, while at the same time dealing with the realities of their civilian lives and the search for a job.

The issue itself was an interesting slice of life and look into the personal lives and struggles of Simon and Jessica. It also works in how their professional lives get in the way of their responsibilities. While the story doesn’t break any new ground, it does seem to set up some interesting stories going forward dealing with death and tragedy.