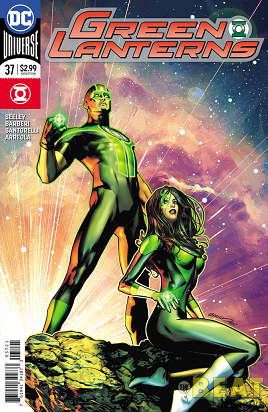 The Ungaran incidents are coming to a head in this issue when Simon is alerted by Liseth Vok that there is something bad happening on her planet. This prompts Simon and Jessica to return to an Ungara seething with anger towards the Molite refugees living on the planet. They go to the capitol to try and get answers and are told that the second in command of the planet’s forces was murdered and the evidence points to it being a Molite who is responsible. Apparently, the murder sparked protests that eventually led to a group of young people entering the Molite refugee camp and were taken, hostage.

The regent asks for the Lanterns to enter the refugee camp and secure the release of the hostages, but they must do it in secret. Liseth distracts the crowd by seeking answers as both Simon and Jessica sneak into the camp via the sewers. When Jessica and Simon enter the sewers beneath the camp, they are attacked by Molites in the tunnels. Jessica attempts to reason with the Molites, but the duo discovers that there is something else at work and it is affecting the minds of 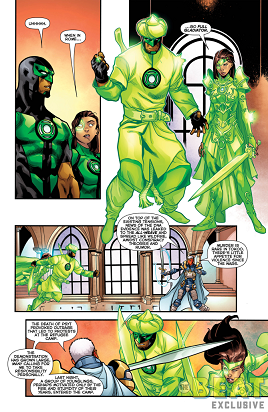 the once peaceful aliens. Jessica determines that whatever is affecting them is increasing estrogen in the females. She uses this to her advantage to distract them long enough for her and Simon to escape.

As the pair confront the Molite leader, they discover that what is affecting the Molites is deeper than they thought and there is more to the taking of the Ungaran youths than meets the eye.

Green Lanterns looks like its building a mystery with this current storyline and that mystery is intriguing to me as a reader. A simple story that could have ended with the relocation of refugees has turned into a full-on murder mystery with political intrigue and I am interested to see how it plays out. Seeley has put Simon in an interesting position with both his relationship to Liseth and his duty and their relationship might help Simon define just who he is. The stories tend to lean too hard on Jessica’s insecurities too often and it makes it hard to see any character growth with her. Other than that, it was a satisfying continuation that I hope gets shaped into a great conclusion.