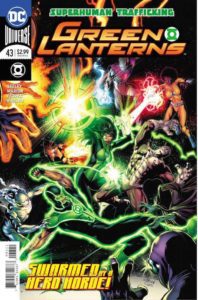 The Order of the Steed has captured enough superheroes to start a small army and they are using that army to attack Simon and Baz who are trying to free them.

As Jessica tries a desperate and untested procedure to remove the implants controlling the heroes, Simon is in a pitched battle with the one who brought them all together in the first place. Scraps has her hands full with a battle with the Night Pilot. A fight that looks like it’s going to come down to a choice. Simon’s fight with the alien shapeshifter takes a dramatic turn as Jessica’s ring informs her that the devices in the heroes heads are about to kill them. 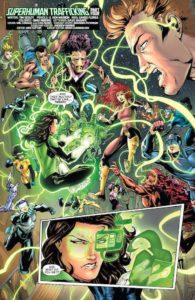 As both Lanterns have to deal with the external threats that are facing them, there is still the matter of their own internal issues. Issues that both sides of the fight are using against them including Jessica’s self-doubt and Simon’s loneliness. Both heroes are going to have to face those things head on if they are to succeed. Scraps will have to decide if she is the terrorist and criminal that she has been called and all of them will have to determine if they can save the heroes and take down the Steed at the same time.

There is a satisfactory conclusion to this storyline. Both Simon and Jessica are given moments where they are put in the position of having to confront the tension between the two of them. Jessica shines in this issue and she is given some great dialogue and character moments. There is some good writing in this issue and the art really shines in the action scenes, especially in Simon’s fight.