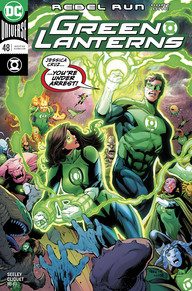 Jessica Cruz is slowly waking up and even more slowly, realizing where she is and what happened when she is placed under arrest by another member of the Green Lantern Corps.

As she tries to find a way out of her restraints, we get a lot of exposition between Jessica and a Lantern of little consequence. After tricking him into giving her time to escape, Jessica starts to piece together the events that have her on the run from the Corps and, more specifically, Hal Jordan. As she sees the events play themselves out, we immediately realize that it’s behavior not associated with her character and that takes the drama out of the rest of the story. It would have been more compelling if this were introduced slowly and built up some tension.

Instead, we get a generic chase story as Jessica tries to figure out what’s happening to her and the corps is on her heels. She turns to some old friends to hide her and that’s a pretty good aside that calls back to a previous story that I enjoyed. Hal and company arrive and there is nothing in their behavior that strikes me as anything other than having Hal in the issue just to have him in it. His presence is hollow and frankly, unnecessary.

Jessica manages to escape and finds herself at a spaceport looking for the contact she let get away and this is another moment that gives way too much credit to Jessica Cruz as a character. I like her as a character overall, but the one thing that has yet to be explored for her is a sense that she is crafty enough to evade capture or move within the fringes of the galaxy in opposition to the other Lanterns who have been doing the job a lot longer. Without context, this story seems flat both in character and motivation.