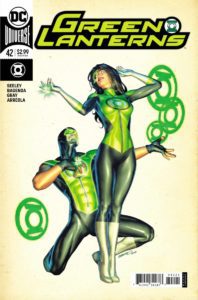 The fall out of the “Capes” dating app continues as Night Pilot finds herself in a situation where she is trapped while someone she dated from the app is the one who captured her. In order to enter the system and rescue her and the other heroes, Simon and Jessica go to John Stewart for advice and to present him with the evidence they’re collected.

Unfortunately, according to legal counsel, the system they want to enter gives them no authority to act in the capacity of Green Lanterns and the two of them are presented with an option that calls for both of them to take a literal leap of faith. As the two of them travel in a cargo ship with others, Jessica’s anxiety is triggered and Simon does his best to help his partner calm down for the sake of the mission. As the two talk, Jessica almost lets slip who her match on the dating app was before they land. 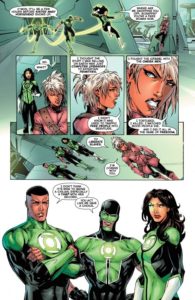 On the planet’s surface, as the pilgrims listen to a speech from one of the priests, Simon and Jessica find the evidence that they need. Unfortunately, they get more than they bargained for in the process.

The action is definitely getting better in this story. There are some great looking panels by Marion that showcase some great details throughout. I liked the pacing in this issue, but there were a couple of moments where it felt a little rushed.  I like the moments that Seeley takes to dive back into the character dynamics of both Simon and Jessica. Those moments are great to see. A fun continuation of this storyline that, I hope, finds a satisfactory conclusion.