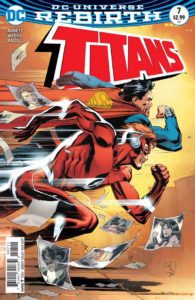 Six weeks after the crushing defeat of the menacing Abra Kadabra by the Titans, and Wally West returning from the Speed Force, the Titans face another steep challenge of figuring out where to set up shop and build their base of operations. They battle it out in Manhattan with a gigantic meta-human named Tyler Wendt who thinks they are the famous Justice League. Arsenal manages to take him down with an arrow around the legs. He and the Flash bicker about how much collateral damage there would have been had the big guy fallen in the wrong spot. Superman swoops in from New York to help, but the Titans let him know that they got it under control. Superman and the Flash queue the nostalgia by doing yet another race, but when they get to Iowa, Superman gives him a heart to heart talk.

Dan Abnet’s writing is pleasant, yet it is not full of too many surprises, twists or rhetorical devices some writers use to enhance their writing. Things that worked well he managed to hightligh such as taking down the big meta with the Titans; a race between two superhero friends that we have all seen before but never get too tired of; and some clues of trying to decipher some of what Kadabra said in the previous issue.

Abnett does add to Donna Troy and Roy Harper’s character development when they are having lunch just getting to know each other. 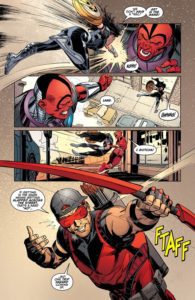 Nothing drives a story-line better than dialogue between two lead characters and Abenett does this extremely well. Its Abentt’s great writing in this scene in the diner that adds an element of “I can’t wait to see where they go with this” type of thinking. My personal pet peeve was addressed in the perfect usage of onomatopoeia’s in this issue. Each one sounded out exactly as if it was whatever action sequence sounded like should be spelled and heard.

Lee Weeks and John Kalisz’s art is consistent throughout the issue using the same lines, shading, and shadows on people and inanimate objects. It is very accessible for anyone just picking up a comic book for the first time. There are some scenes where the shadows emphasize the richness of the picture. My only gripe is that I do not remember Superman having blue boots. Ever! He looks like he is wearing a onesie jammies.

Overall, I really enjoyed the book. I am starting to lose track again with how many times the Flash has died only to return. I am going to need to start using a flow chart on a dry erase board to keep track of everything. This issue could have used a mid-level villain other than the unnamed character they used. The chemistry between Donna Troy and Roy Harper was written terrifically. I hope to see some sparks fly in later issues. There was a ‘wait just a minute’ factor when Superman told the Flash that he remembered him. It alludes to the Rebirth and trying to figure out the 10 years lost. I enjoyed the last issue more than this one, but this one was still fun and entertaining. thanks to a few scenes which saved this one for me.