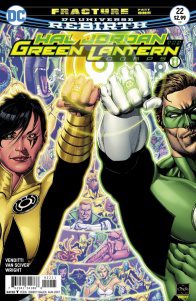 On an isolated planet between allegiances and away from politics and agendas, a man is contemplating breaking into an intergalactic vault that everyone in the universe uses. On Mogo, both corps continue to try and find ways to get along with each other. When a distress call comes in that the Vault is being raided, John Stewart gathers both corps to send them on a mission to help. Led by Hal Jordan, the teams make their way to Vault as the ships that have gathered to raid the planet stay a little too long. Both teams move in to take down the pirates and, working together, they are victorious. 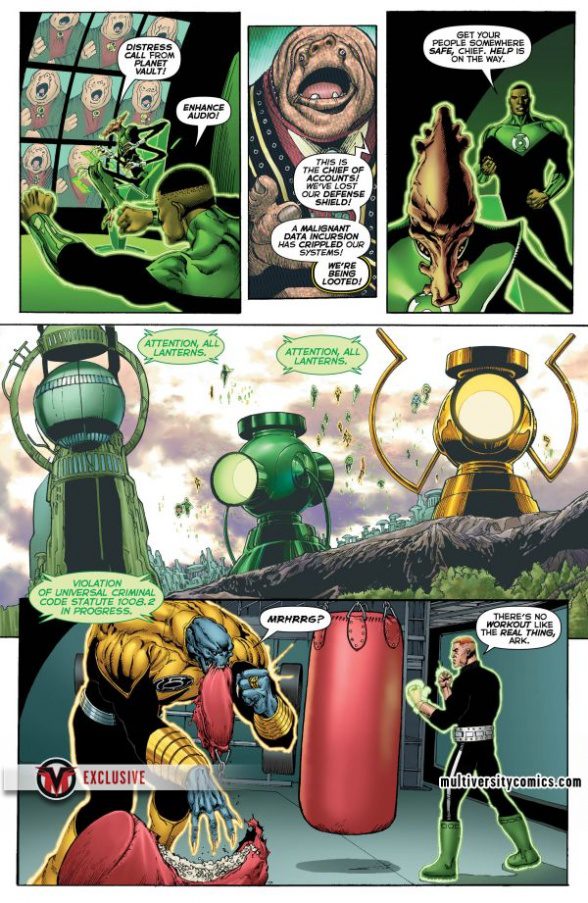 As the pirates are taken down, Tomar-Tu freezes in battle and goes off on his own. Hal leaves Killowog behind to help get the energy shield that protects Vault back online as he and the rest of the lanterns return to base. As the pirates are escorted to their cells, Soranik and Kyle Rayner have a moment alone to think about the experiment that they find themselves in and Kyle gives her something to think about on many levels. As Hal and John interrogate the leader of the raid, he threatens that if he isn’t released, he’ll reveal information that could shatter the alliance between both corps.

Have you seen this:
Devil's Reign, SwaMP Thing: Green Hell AND MORE: THE GWW PULL LIST

It’s nice to see these groups working together tenuously. Even though there is no way that it can possibly last, at least it’s interesting to see what Venditti is doing with the story. Knowing that there can’t be a positive end to this alliance puts a little bit of a taint on everything that happens between the individual characters and that only adds to the drama in a positive way. It will be interesting to see where the story progresses. Ethan Van Sciver’s work is always amazing when he’s drawing these characters. He really knows how to capture their power and movement on the page.