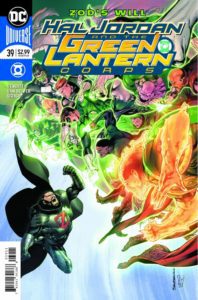 Hal Jordan is being held prisoner by General Zod on the planet Jekuul. As he languishes in a prison cell, he remains unbroken even when Zod appears to talk to him. Hal remains defiant as the Kryptonian proceeds to lay into Superman and lament the loss of his planet. Hal explains to him what’s coming and gives him a choice. A choice that cements to Hal that Zod is clearly lying about what he really wants.

At HQ, John Stewart has had to put Kyle in containment because the amount of will coming from Hal’s ring is becoming too much for the young Lantern to take. After relaying to John and Guy the circumstances that brought him back wearing Hal’s ring, John decides to go see the Guardians despite the objections of Guy. As John decides to give the new chain of command a try, Guy decides to formulate a plan with the increasingly energized Kyle. John lays out the scenario to the Guardians including the significance of Zod’s location and what the ore the natives are mining could mean before telling them what his plan is for rescuing Hal. He does not get the response that he hoped for. 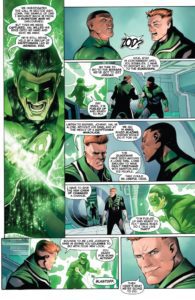 As John makes his way back to the battery, he notices a strike force of Lanterns leaving the planet on their way to rescue Hal. In Zod’s fortress, Eradicator is studying Kyle’s ring as the Lanterns attack and Zod decides to take his family into battle.

The climax of this issue is fun. There are some great hero moments in this story and the art is amazing. It’s good to have some engaging dialogue in the moments with Hal and Zod. It shows depth to the characters and gives the reader a sense that there is more to come. The Lanterns going off on their own without a plan is dumb in my opinion and its exactly the same gambit that got Kyle and Hal captured in the first place. There is a place for bravado and a place for planning and I wonder who’s going to have to get seriously injured or killed before they learn that lesson.