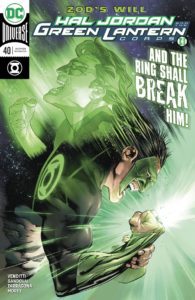 John Stewart has to answer to the Guardians for what the Lanterns under his command are doing on Jekuul. As the Guardians want answers, John takes the blame but the damage is done and the rescue mission is underway.

The Lanterns continue to battle Zod and his forces on the planet as Hal languishes in his cell and the Eradicator attempts to unlock the secrets of Kyle’s ring. The Lanterns do their best to take on the Kryptonians, powered by the light of twin yellow suns and a populace that worships Zod as a god. All of these factors make barreling into a battle a stupid idea, but the Lanterns have done it anyway. Added to the ever-growing list of problems is that the inhabitants have weapons that can pierce the Lantern’s construct. 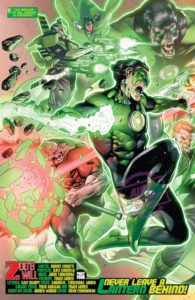 Have you seen this:
Nightwing #72 (REVIEW)

As bad a plan as it was for the Lanterns to rush into a fight without a plan (for at this point, the third time), what’s worse is that the action of this issue mirrors that of the last two. With the exception of their being more players on the field, this battle went the same way as all of the others. As good as it looked, the battle just seemed repetitive. As good as this issue looked, there just wasn’t much there. At least not enough to sustain an entire issue. Unfortunately, the bulk of what was in the book could have been condensed and added to the last one and the action at the end of this one rolled over into what might be the conclusion.

As much as I enjoy this story, this particular issue felt repetitive to the last one. It played out roughly the same way that the first encounter did and its conclusion was less than dramatic given everything that happened before. Hopefully, the next issue will bring this arc to a satisfactory conclusion.