Since the official announcement of the Nintendo Switch, Nintendo has been really focusing on showing off their upcoming console as much as possible. Part of their schedule tour, Nintendo’s first stop on their tour to promote the upcoming Nintendo Switch was this weekend in San Antonio during PAX South.

Some of the games on display during PAX South were: Mario Kart 8, Bomberman, Splatoon 2, Street Fighter, Arms, and of course, Legend of Zelda: Breath of the Wild. 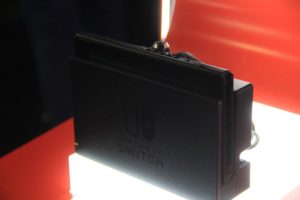 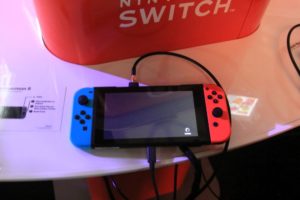 Each game showcased had a different controller configuration so attendees could try each of the options from Handheld mode to the Pro controller.

I’ll start with the games we got to try out: 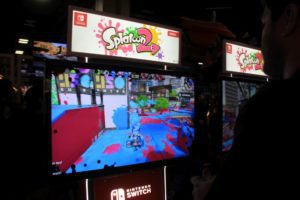 First, for the game Arms. I’ll say right off the bat, this isn’t a game that has really caught my eye, when they first debuted the footage during Nintendo Direct, I wasn’t that impressed. It’s honestly not my type of game, but we did get to play the game with the left and Right joy cons. First impressions are the responsiveness was actually really impressive. The joy con’s are light, at it may feel like they might fly out of your hands if you are aggressive enough. I guess, that’s why they include the wrist straps. I noticed nearly no delay when when swinging and throwing punches. It was pretty smooth. I say right now I was completely reluctant to playing with the joy cons, but they weren’t bad. Mind you, we only tried them with Arms.

The second game I got my hands on was Street Fighter, this game was played with the Pro controller. This controller is also extremely light. The analog sticks were sturdy, not very resistant at all. Of all the different methods you can play the Switch, this was my favorite. $80 for the Pro controller is a little overprice though. 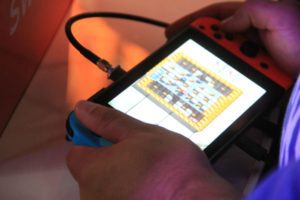 The third game we got our hands on was Bomberman. We played in handheld mode. Playing in handheld mode takes a little getting used to, it may feel a little small at first but it was really easy to adapt. It doesn’t nearly as awkward as the Wii U gamepad did. I hated playing on that thing.

I didn’t get my hands on Mario Kart 8 while I was there but I was able to witness the gameplay as all the attendees there played in handheld mode. This may have been the most impressive part of the whole booth. Multiple players were facing off against each other on these small screens and the gameplay was great for a handheld device. One of their seating layouts were configured like the inside of an airplane to give gamers a feel for what it could be like for two players sitting side-by-side playing on a single screen.

Have you seen this:
7 Weird Facts about Casinos in Nevada

Now the game I had been highly anticipating since the announcement back in 2014, The Legend of Zelda: Breath of the Wild. I, personally, didn’t get to play this game but in a way I’m kind of glad because this would have only further fed my impatience for the March 3rd release date. I did watch others as they played the very introduction of the game, where Link awakens to Zelda’s voice then immediately players began exploring. It’s no surprise by now but the map itself looks massive. It’s even more beautiful in person. Also, there is plenty of voice acting! This is certainly a new and welcomed feature to the Legend of Zelda series.

After spending a good portion of my time at the Nintendo Booth, I think as someone who already had the Switch preordered, this experience has really added on to the hype. Personally, I can’t wait ’til release date.

We did periscope the event live, you can check it out here and here.

Got any questions for us regarding the switch that we didn’t cover here? Let us know in the comments below.