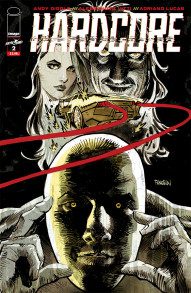 Hardcore #2, while it has plenty of action, couldn’t keep up with Hardcore #1. In fairness, though, Hardcore #1 set the bar immensely high. Hardcore #2 also integrated a few new characters, which slowed things down, too.

While Agent Drake, that lunatic Markus and his secret weapon Bonnie Pierce are all still in the picture, Andy Diggle introduced a few more characters that will likely play key roles.

First, there’s Belinda Cray, who also works for Markus. She seems a bit more, well, like the “in your face” type than Pierce. Though she’s probably stealthy in her own right—probably more “in the shadows” than “in plain sight” like Pierce—she led a strike force team to capture a package for Markus. Now, there wasn’t much development of Pierce or Cray in this issue, but it seems like the latter is more of a human weapon than the other, simply based on how Markus handles them and the assignments each were given.

Then there’s Lupe, Esteban’s lover. Oh, Colonel Esteban Montenegro is the guy Drake is control of. He was originally on an assignment to kill a General Vasquez, who’s the husband of Lupe. (Drama!) It seemed like she was in a daze most of the issue, caught off-guard by Esteban’s line of talking. In reality, she was paying attention the entire time. What’s unclear is whether or not she’ll be able to help Drake or be a major thorn in his side.

Furthermore, the biggest obstacle for Drake won’t be Lupe or Vasquez’s men hunting him. Markus and his cronies are priority number one. But they can see every move he makes in Esteban’s body because of the Hardcore tech. It seems like an impossible feat.