Heist or How to Steal a Planet #1 (Review)

Heist or How to Steal a Planet #1 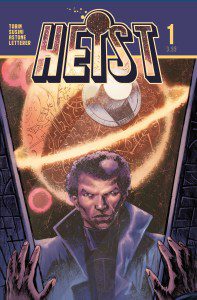 I believe we have seen Heist before. At least we have seen a ton of comics, movies and TV shows that start with the same premise: former prisoner wants revenge for who put them there. We have seen this a thousand times before, and most of the other variations execute this trope better.

The story that Tobin tries to create is simply predictable. Making the planet as the target is a unique gimmick, but that’s all it is. The development of Glane Breld for revenge is boring, and super clique. It isn’t that it’s badly put together, it just feels like we have seen this before.

Susini’s art is good in Heist. The characters look good and so does the environment around them. Something that was a bit off-putting is that some characters and items have a weird proportional slant to them. It was something I didn’t notice during the first read-through but saw it the second time around.

The biggest complaint with this issue is how predictable and bland everything is. From Glane Breld being the typical ‘out for myself’ convict that wants revenge and the other side characters that are just as bland and boring. Using a heist style story, they needed to be more creative and original with the reasons for Glane to want revenge.

I didn’t hate the issue but it just felt like it was one that we’ve seen many times before. I see a lot of potential in the series when they are able to expand on the characters. I will read issue two as they gave enough to keep me interested in what happens next. But if the next few issues become a paint by numbers heist story, then it won’t be a memorable story.