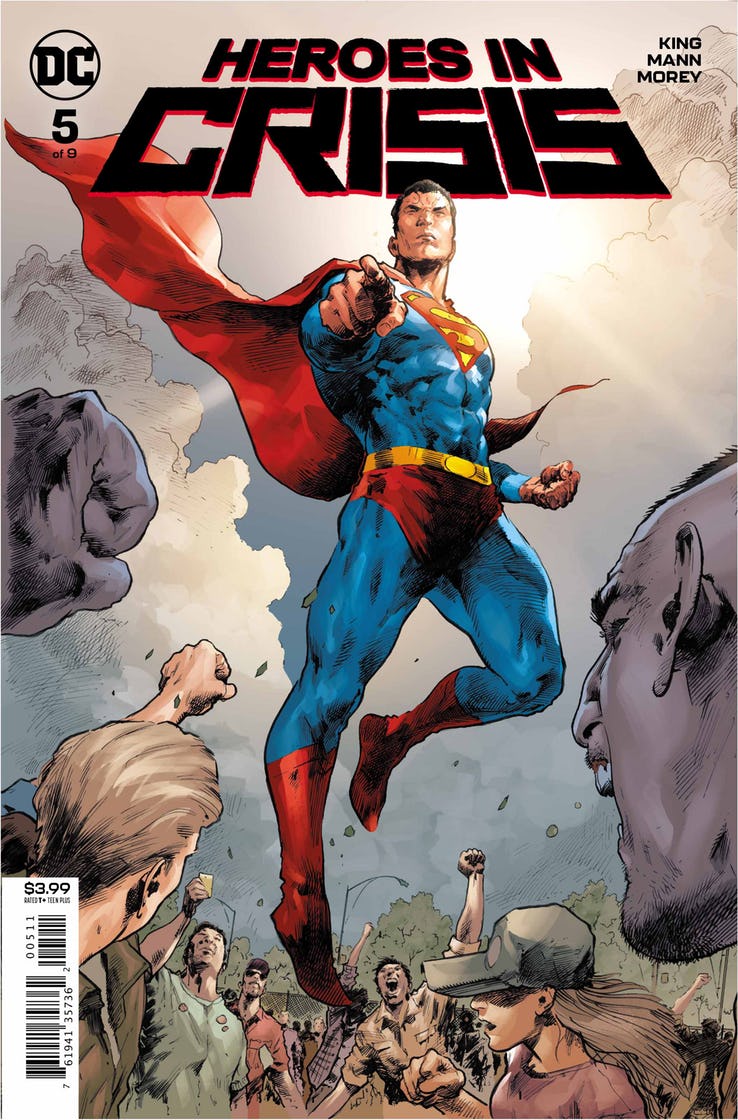 There are two things that are mainly being dealt with as we continue in the Heroes In Crisis story. We usually see characters talk about their trauma and sometimes see how they’re dealing with it or not.  The other half is we have this mystery about all the deaths that happened at Sanctuary. Each issue has a balance on how it’s focusing on both of these aspects. I believe this issue may be the best with just not talking about the trauma that the heroes experience, but the way they can either grow from it, learn from it, and even at times just bury it so that they can focus on what they do, which is saving lives. There are parallels with this during Superman’s speech to the press in regard of the event’s in Sanctuary, its purpose, and how the people of this world may feel probably realizing that even these people with powers are just people who have to deal with things such as death and tragedy.

We see the same kind of things that can be brought up with members of our military, firefighters, police officers, hospital workers, rescue teams and such. These are all people who may run into death more times than they would want to and they have to put on a brave face every day when others depend on them to do their job to save lives. The most important thing that Superman says is how even though we all have that fear of how someone we depend on may not be able to manage the task anymore, we still support each other through these difficult event’s not so that we can continue to do our job, but so that we can also have some sort of peace in mind.

The other side of the story in this issue is seeing Blue Beetle and Booster Gold acting out on a plan to clear his name and he even might know something that will only bring more questions to the readers and the heroes investigating. We see a continuation of Batgirl working with Harley Quinn which is a very fun and enjoyable to read and it’s great to really see someone reach to her and help her instead of the typical thing where she’s either thrown into Arkham Asylum or on the Suicide Squad.  I don’t think I can get over the art from this team enough.  The way everyone looks and the expressions we get off these characters are some of my most favorite work in comics now. The letterer Calyton Cowles also does some great work getting Superman’s speech to flow so well through the pages.  The issue reads so smooth and I just didn’t want it to end.