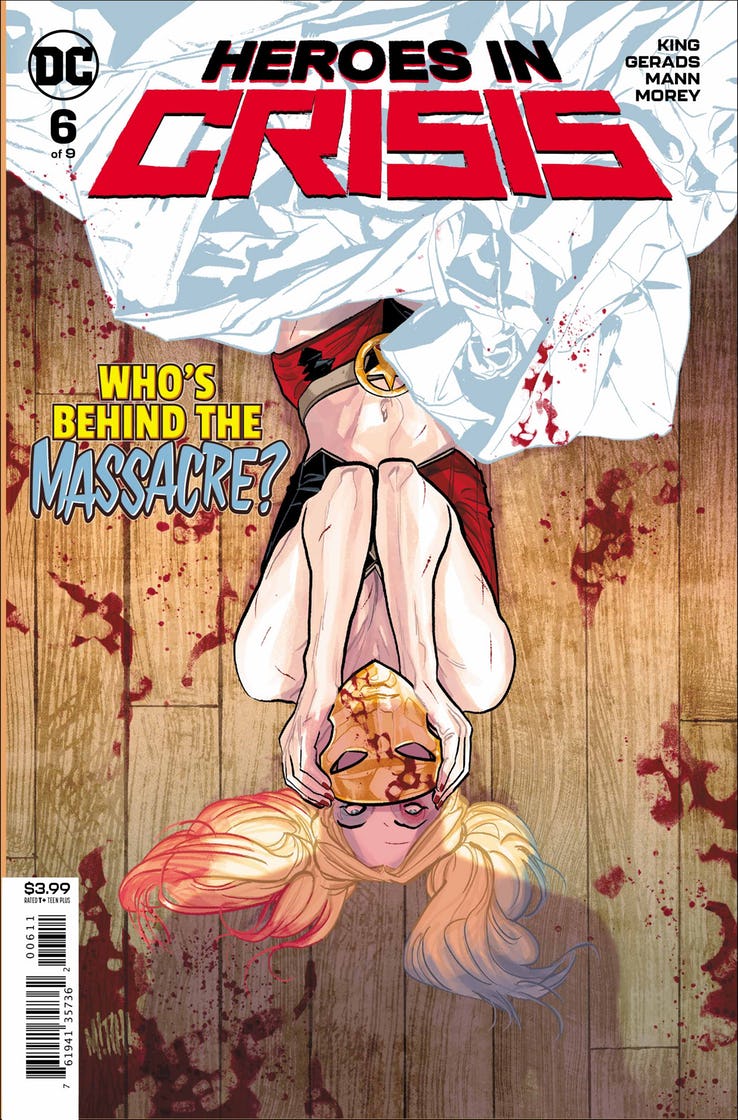 With Heroes In Crisis #6, we aren’t getting a direct continuation of events from the end of the last issue. Instead, we’re taken back prior to the murder where we see Wally West, Harley Quinn, and Gnark as they go through their sessions at Sanctuary. There’s a topic discussed among them about saving people and then that goes into about how they are currently feeling overwhelmed with certain situations in their lives. Even though Wally has his friends in the Titans, he still feels very alone which is understandable since he no longer has his family in this world and doesn’t know why yet.  Harley is hanging out with Poison Ivy and she has a confrontation who has been a huge part of her life. What makes this so great though is how she is able to get through it all with the support of a friend. Gnark is quite an interesting one because he’s not exactly someone taken to be a star character.

The thoughts that go through his head on where he is at in modern society and how he feels conflicted about no longer living in the past. There were simpler times but then there are all the things he is able to enjoy in the modern day. Most importantly, even with all, he has done. A part of him still feels like an outcast. I think that is what this is about. It’s about how no matter how many outstanding actions you make to better yourself, others around you, or even saving people. It all just may never feel enough because of how you look, what past actions you have committed, or no longer having certain people in your life anymore. For as happy as they may seem around others, they feel alone deep inside and hide it which is an all too familiar feeling for myself and many people out there.

Mitch Gerads came in to do most of the art for this issue (specifically pages 2-19). It doesn’t feel too far off from what Clay Mann has done for the series and certainly deserves to be recognized for drawing some of the most beautiful images of these three characters ever. So many of their emotions here just come off so real and makes you want to see them all come out on top in their internal fights. The letterer has also done a great job and there’s a specific page with Harley and Poison Ivy. The way that conversation rolls as you read it just felt gripping and that is something that has been really consistent throughout the series.

There are battles fought here but not in the traditional sense when it comes to superhero comics. The struggle these three shows in what they’re going through and being able to confront what it is that’s killing them just show’s how hard it can be to always put on a brave face or even a smile.