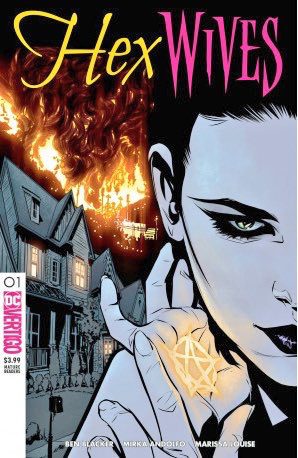 Hex Wives arrives just in time for halloween and is a simple idea with a darkly brilliant twist. What if the witches from the Salem trials had survived and were present living amongst us in the modern day? As beautiful suburban housewives with deadly secrets and powers beyond what their mortal husbands could imagine. At its core, the story being played out is that of women being suppressed by men. As we follow the coven throughout the years post 1692 we see their bond and unity grow tighter as they fight back against the ages of MANipulation. Will the witches survive in Modern times? Or is it time for their hocus pocus to end?

The issue opens with the witches bang in the middle of a witch hunt in Salem 1692. The three witches that form the coven are Nadiya, Rebekah and their powerful yet beautiful leader, Isadora. We see them trapped and being attacked by an angry mob and how they have hunted the witches for generations. It’s a violent yet somewhat necessary introduction to these characters to learn early their true power. Each bistows the standard witch abilities off conjuring and levitation aswell as even more impressive supernatural powers. One can turn to stone. One can talk to the animals. Leader Isadora however has the ability to gain power from drawing blood from her victims. Each kill makes her stronger and more violent. She is a force to be reckoned with and I instantly fell in love with this character.

The issue continues to show us the witches move across America throughout time. From its opening of Salem 1692, we see the movie travel to the 1700’s, 1800’s and ending up in New Orleans 2005. Through each movement of time, a stronger sense of unity in the girls is seen as they are constantly chased and hunted down by man. It’s to disastrous ends for the hunters however as they are simply no match at each encounter. Some of my personal favourite panels played out in the 1700’s where’s we get a true insight into Isadora and her violence. The blood sprays across the panels, she’s half dressed and beautiful and it’s art by Mirka Andolfo captures it all stunningly.

The issue later shows us the side of man and their plan to defeat the king running coven. This is where we then cut to modern day (2008) and things take a drastic turn in seeing the witches in a completely different light. A brilliantly timed cliffhanger left me eagerly awaiting issue 2. I’d highly reccomend you pick this up this week it’s captured my attention like some kind of spell. A must read this Halloween.