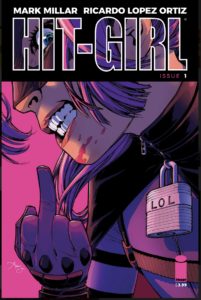 The return of break out star from the Kick-Ass universe is here as Hit-Girl is back in the Millar driven vehicle and its absolute perfection. Whether you are a long time fan of the comics, fan from the cinematic interpretation, or just picking up a new #1 for the first time, Hit-Girl is sure to impress. With a story that is unquestionably the personification of Hit-Girl, Mark Millar gives Mindy the perfect characterizations and nuances that make fans across the globe fall in love all over again with this pint-sized, throat slashing, bullet flinging, profanity dropping vigilante. Ricard Lopez Ortiz brings Millar’s story to life, dressing up the pages with perfect Mindy McCready expressions, exceptional action, and of course, lots, and lots of blood. The combined workings of these two titans creates the perfect platform for Hit-Girl to exact some epic justice.

Hungry for some blood and vengeance but short a sidekick to exact it with, Mindy goes on multiple hunts for the replacement of Dave’s Kick-Ass. After one failed attempt, Mindy comes across the seemingly perfect candidate. A recently captured ruthless serial killer. After Mindy’s original imagined plan with her previous Kick-Ass replacement goes awry, with a little support from the memory of her father, little McCready dusts herself off and goes back into the game ready to find a tag team partner worthy of her bloodshed and the Kick-Ass mantle. After the capture and a demonstration of her brilliantly devised plan to keep her new ‘friend’ in line, Mindy reveals that she wants to utilize the killer’s natural abilities to assist with her overall mission, but mainly she just got bored doing it alone.

As a fan of the comics, Hit-Girl #1 is absolute perfection. It expertly mixes humor and violence into a dark campy epic box of fun for the reader. Executed with picture perfect art to portray the writing to the nth degree. As a fan of the films, I can absolutely see Chloe Grace Moretz’s iteration of the character portraying the actions and lines and have already mentally fan cast the rest of the revealed characters in case HBO, Showtime, Netflix or Hulu feel like picking up a Hit-Girl series written and show ran by the Millar and Ortiz duo. Ultimately, if you know anything about the Kick-Ass universe, if you enjoy a good fun comic, if you have a bit of dark and twisted sense of humor, quite frankly, if you’re a comic book fan whatsoever, do yourself a favor and go pick up Hit-Girl #1, after you’re done smiling like a psychopath, you’ll thank me.

Have you seen this:
The Pull (REVIEW)