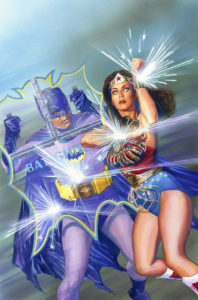 In the first issue of this crossover, Batman and Robin speed to a home to thwart Catwoman as she steals an old book for a mysterious woman. As the Dynamic Duo return to the Batcave, they begin to analyze a clue retrieved from the escaping Catwoman. This clue leads Batman to recall a story from his youth to the eagerly listening Boy Wonder. The story unfolds at a party being thrown by the Wayne Foundation in the early 1940’s. As a young Bruce Wayne is watching the people at the party, he is introduced to a young lady named Talia and her father: Ras Al Ghul.

The party includes rare items that are being auctioned off for charity, including a set of ancient books that have attracted the 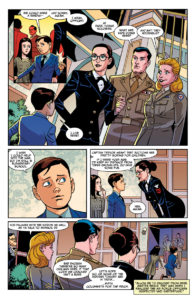 attention of both Ras and a Nazi commander. Both men are determined to possess the books from the man who purchased them, but they are thwarted by the intervention of Wonder Woman. The amazon must deal with both the Nazis and the League of Shadows as young Bruce and Talia attempts to escape from Wayne Manor.

Jeff Parker and Marc Andreyko have written an interesting first issue. It effectively calls back to the original Batman series without being overly campy. This Batman seems more capable in the first few pages and the introduction of Wonder Woman is handled well. The artwork by David Hahn is delightfully retro in style. This is an interesting first issue that, if consistent, could bring me back for the remainder of the series.

Batman ’66 meets Wonder Woman ’77 #1 is a solid first issue that effectively sets all the pieces on the proverbial board in a way that makes you want to see the next move. The writing is crisp and the visuals give a retro feel that is in keeping with the subject matter.