How modern games are making players use their brains more

A recent study by the University of Geneva suggested that action video games can expand the brain’s cognitive abilities, with areas affected including perception and reaction time. Data was gathered over 15 years by an international team of psychologists, and the study focused specifically on first-person shooter and warfare games rather than ones that included an obvious problem-solving element. The results showed that even playing the most repetitive, action-based games can strengthen the brain cell connections underlying memory and learning through repeated actions.

The supposed negative consequences of game playing are the ones usually stressed by the media, with claims that video games are addictive and promote real-life violence commonplace. A sedentary hobby that may be pursued in preference to physical exercise or sport, video games are blamed for rising levels of obesity and anti-social behavior, with some saying that they reduce emotional intelligence and encourage a dangerous solipsism.

Of course, any activity when pursued to excess can have risks, but to focus entirely on the possible disadvantages of excessive video gaming is to miss the many positive qualities that this activity can engender. It also shows a lack of understanding in terms of the sophistication of modern video games, which are no longer the simple shoot ’em ups or platform games of yesteryear.

Many video games are also no longer a solitary pursuit. Broadband internet has allowed the development of massive multi-player games such as World of Warcraft, where individuals interact with other gamers from all around the world, playing both against and alongside them. Frequently, these games require the use of valuable soft skills such as cooperation, teamwork, leadership and strategic planning. Friendships can also develop outside of the game in chat rooms and forums. 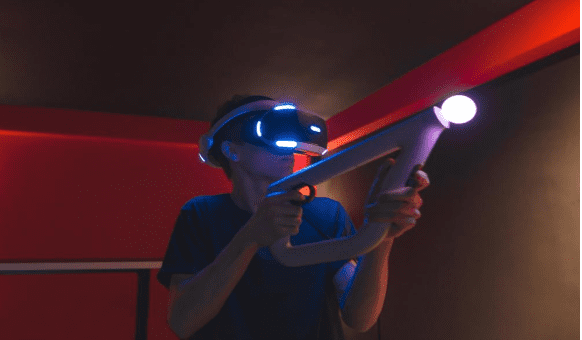 There are also many games that can be played with real-life friends all gathered around the console or PC, and others that involve physical exercise, from dancing to simple movements that generate an on-screen response. As technology and gaming mechanics improve, particularly in the field of virtual reality (VR), this interface between healthy physical exercise and video gaming will doubtless become more widespread and sophisticated.

Improvements in gaming hardware have certainly given players greater opportunities for using their brains. Faster and more powerful engines and processors not only mean improved graphics and action, but they also allow for a more complex and detailed game world to be created. This, in turn, allows for multi-layered narratives with greater subtlety and depth. Whereas in games such as 1993’s 7th Guest, problem-solving meant unlocking simple puzzles, today it can mean becoming the protagonist in a gradually unraveling mystery story. Intuition, observation, logic and lateral thinking worthy of Sherlock Holmes are required in order to complete modern mystery games such as 2010’s Alan Wake.

Modern technology has also given a new lease of life to traditional table games such as blackjack, roulette and poker, keeping them relevant in the digital age. Video poker still requires the same resources of cool, logical strategy and skill as its tabletop equivalent. With live Texas holdem from leading online casino providers 888casino, you play against a live dealer in a head-to-head contest of nerves and strategy. This is certainly not a game for anyone who’s not on the ball, and players will find that they need to sharpen their wits to survive.

No one now doubts that traditional puzzles such as crosswords, Sudoku and Scrabble stimulate our cognitive abilities and help to keep our brains young and supple, so it should come as no surprise that many video games also exercise our brains in a positive manner. In fact, by combining problem-solving and logical conundrums with the need for quick thinking and fast reaction times, modern video games such as Overwatch and Destiny 2 actually give our brains a more thorough workout than an ordinary puzzle book could ever hope to provide.

Video games often test our motor skills, reaction times and problem-solving skills simultaneously, and having to do several things at once while under extreme pressure improves concentration skills and prepares us for being able to handle stressful situations better in real life.

The power of imagination

It’s also no small thing to say that video games stimulate the imagination. The hugely popular World of Warcraft includes many different planets, civilizations and characters for players to get to know, while world-building games such as Minecraft actively encourage players to get creative. For children, these games can inspire them to imagine and create their own stories and artwork, as well as showing how these can be structured most effectively. For adults, the chance to access the childlike sense of wonder and fantasy that we often suppress in our day-to-day lives can be a valuable exercise, and one that can have a practical use as well as providing a healthy dose of relaxation and escapism.

Learning to use our imaginations again can help us to “think outside the box” at work or find creative solutions to a range of difficulties in our lives.

Have you seen this:
What Technologies are Used To Develop Gamstop System?

For those concerned about the growing amount of violence in AAA video games such as Call of Duty: Black Ops 4 and Grand Theft Auto, a wave of increasingly popular “chill out” games from indie developers provide a healthy alternative. These also promote useful cognitive skills, albeit at a less stressful pace. Stardew Valley by ConcernedApe has been a breakout success, selling over 3.5 million copies, and involves running a farm while interacting in a friendly fashion with the local rural community. Ooblets involves the creation and nurturing of imaginary creatures and then using them to explore the game world. Not only do these games help with stress and anxiety, but they also encourage empathy, social skills, intuitive design, imagination and trust.

Today’s games are undeniably more sophisticated, complex and detailed than their predecessors, and require more sophisticated interaction from players as a result. Modern gamers expect to have their mental processes challenged, and relish the experience of having to think on their feet and solve problems, make decisions and hone their reaction times. While played for fun first and foremost, a good game is expected to give the brain a solid workout at the same time. Indeed, if this quality was not present, most gamers would be unsatisfied and would feel as though they’d been cheated.

All images are copyright free and from the image provider depositphotos.com