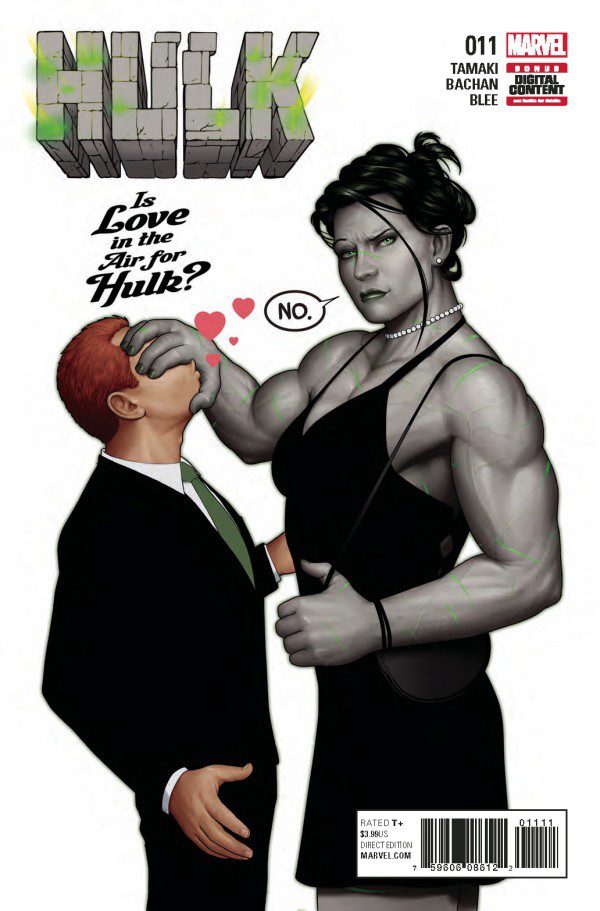 Marvel’s final issue of Hulk comes to somewhat of a disappointing closure as we finish out the latest run of Jennifer Walters’ adventures as the hero/lawyer known as She-Hulk. Mariko Tamaki has ushered the entire run and it’s disappointing to see go out this way prior to continuing She-Hulk with the next Legacy arc and returning her full name to the book’s title. Even though it was anti-climatic Hulk #11 has the pleasure of being a nice fun break as it rests between the end of the last arc and the beginning of a new one. I have always enjoyed it when the hero books take an issue to let the characters enjoy themselves from the super heroics so you may grow them a little more as people.

It starts off with Jennifer and her friend Patsy going through her wardrobe to find what Jennifer will wear for a date with a guy she met on a Tinder-like app. A couple of things I enjoyed in these few pages was the fun banter between Patsy and Jennifer. It was also funny to see how Jennifer has yet to make adjustments in her apartment for her human form as she has to stand on a box to look at herself in a mirror. She had her apartment accommodated to her Hulk form and has yet to stay in that form unless needed since Civil War 2.

Some of the story continues to be a calm and enjoyable tale as Jennifer is preparing to go on her date while a “love novel” type of narration is appearing on the panels to Jennifer’s annoyance. She even kicks and begins to block these word bubbles that are filled with stereotypical cheesy love quotes. Halfway through the issue is where it begins to fall apart. As she is being annoyed by her date and I enjoy the fact she is on a bad date with a regular guy but once it is over it turns out to be a trap and she is surrounded by robots in the restaurant. The robot battle somewhat takes away from the slice of life break that I think the character really needed after the last two arcs and the fight just seems shoehorned in. 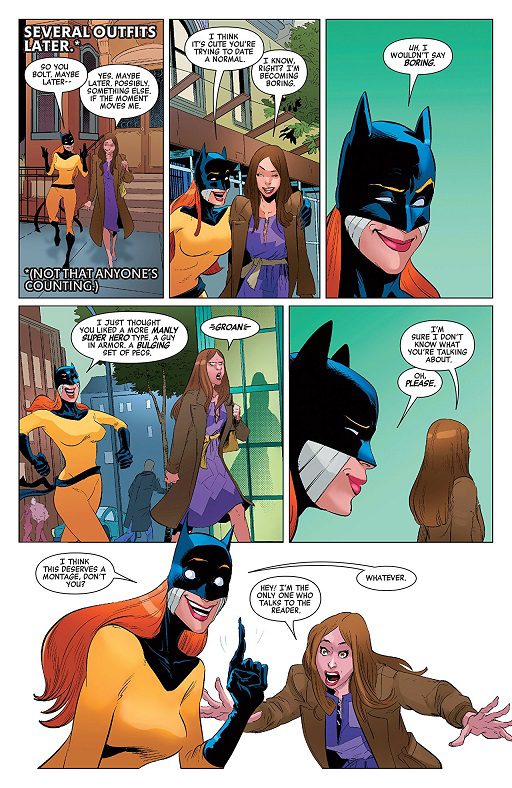 I still enjoy that the book ends with Jennifer and Patsy having tacos laughing the night away, but this “send off” could’ve been done much better without the robot fight as Jennifer has been shown to be more than just a Hulk beast. One last note on the story is the mentioning of her grey Hulk form by whoever set the trap. Giving her a larger, stronger form and a somewhat less mental state. I am sure this is something that will go into play in the next arc. I don’t believe this should’ve been used to set up a villain on the next arc, instead just give Jennifer a fun night out whether since this is the end of her time on “Hulk.”

As far as the art goes on this, Sebastian Bachan Carrillo filled in as the artist for this one issue. I found it to be fine but miss the somewhat cartoony look from previous arcs. Some of the anatomy seems a bit off but nothing ever took me out from the art perspective. Coloring was done by Federico Blee and I think I would’ve preferred it to be a bit brighter, but I think the intention was to go for a bit of older style with the coloring.

Ending on this issue with Hulk could’ve been much more fun and perhaps even brought more up about how Jennifer is balancing being herself and the She-Hulk. It’s only disappointing because of how strong this run started, but here’s hoping for more fun adventures next month as we are set to dive into She-Hulk #159.