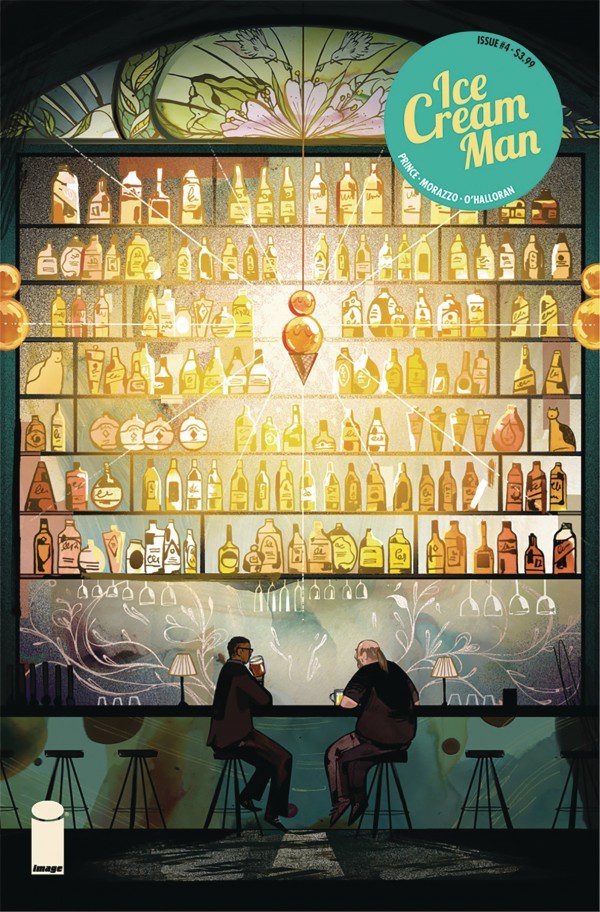 Ice Cream Man seems to just be getting better with each issue. What started off as something that led me to believe it was going to be about the mystery’s of the weird town it’s set in, instead has seemingly turned into a series with some important messaging when it comes to making important life decisions. Like the previous issues, we’re focusing on someone new and discover a personal problem he is having. Joel is shown as a man that has a beautiful wife with a son soon to be born. Unfortunately, right now he has to go to a funeral for an old friend who has passed at a young age. After the funeral, we meet Mr. Carson. He’s the father of the Joel’s friend that has passed and has a dark past that is shared. Through their talk, Joel shares some serious things he doubts about his life and asks Mr. Carson for some advice.

What’s important here is how we’re lead to believe that Joel’s sadness is due to his friends passing but instead is just another layer added on top of what he has already been through in his life. I love the exchange that happens with him and Mr. Carson as he has a very real and heart to heart talk with him, and explains, that what you have right now is about to become the most important thing that you’ll ever know and you’ll regret not giving your fullest to it. What has also made this issue stand out more from the previous is that we aren’t following down a road where the path ends in horror for out character. Instead this about recognizing the choices you have and knowing the right direction to go.

If you’re wondering about the towns ice cream man in this issue, he still get s a small part to play in it as it adds more into the mystery about him. We’re also not left out with some of that weird factor that the series has been very fond of giving us and I think you’ll very much enjoy what the team on this book has brought us this time. Ice Cream Man #4 may be the best issue so far and is highly recommended for all readers to check out, even if you haven’t read the previous 3. Which you should.