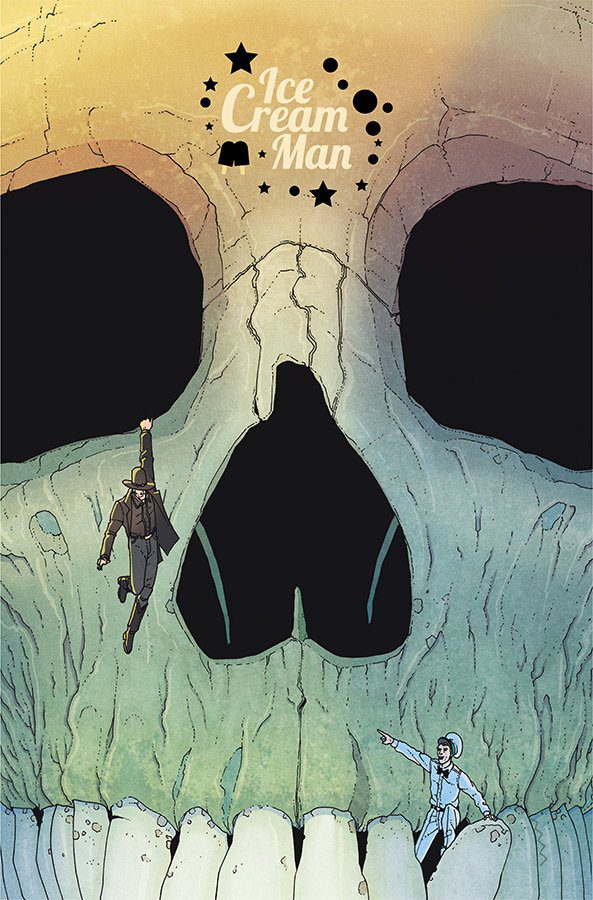 Ice Cream Man #9 is another one-shot story in the series. Here we have Caleb, and alien looking character who in a way resembles a bit of the “Ice Cream Man” we’ve seen through the series. Like previous issues, we see the horror elements and event’s that occur. I find it great how the series continuously introduces new characters for these one-shot style stories while still getting us up to feel something towards the characters, whether that’s sadness, compassion, hate, anger. By the end of the issue, you’ll think about what you’ve read and how terrible it is how sometimes bad things happen to people. Caleb shows to live quite a simple life, his cousin Rick, on the other hand, is attracted to something more thrilling. They’re eventually given notice that they need to move somewhere new and even though Rick doesn’t seem like much of a genuine person upon introduction, this moment here paints a much clearer image on the selfish kind of person that he is. The setting is like a light western style and the only things that really evoke this is Caleb and showing what he seems to do on the daily along with how he and his cousin are dressed. They’re out in a very deserted looking area, but with the lack of a town or large community, it just feels like there are living a more isolated life.

The art style from the team here continues to really work with the tone and feel of this series. At first glance, some may dismiss it but as you read along, you see just how well it really meshes with everything. I also found it quite enjoyable with the way they give certain things a sense of scale and how size may be perceived depending on the angle certain things are looked at.  It actually created this very smart and well-delivered shock when Caleb is out hunting. Backgrounds are the least appealing in the issue as many times, there is just not much interesting going on but the focus here is really the characters in the panel. The letterer did a great job to make sure the script for this issue flow very well as it makes you curious on wonder where exactly are they trying to go with it and we are given quite a splash page that is definitely a talking piece for the issue.

If you want something weird, different, and a bit creepy at times.  Ice Cream Man is the series for you and what makes it more enjoyable is how it seems you can really just jump in on any single issue so far.