Infinity Countdown Prime #1 is just what it says it is: a primer for the upcoming mini-series. The first page explains the powers granted by each Infinity Stone. Then the issue opens with Wolverine sitting by himself in the wilds of Canada. The empty beer cans suggest he’s been sitting for some time (or chugging). He’s attacked by minions of Ultron who have come for the Space Stone. The fight goes the way the reader would expect (especially since Wolverine can teleport, “popping” as opposed to “bamfing”), and once it’s over Loki shows up offering to carry the “burden” of Wolverine’s Infinity Stone and warning that others, including Stone Wielders, will come for Wolverine.

The issue takes on a different tone after Wolverine teleports away from Loki. A series of vignettes play out showcasing different characters, all of them wielders or defenders of one of the stones, and over the different scenes, someone narrates. In order, the issue shows Turk with the Mind Stone, Captain Marvel with the Reality Stone, the Guardians of the Galaxy with the Power Stone, and Super Skrull with the Time Stone. The narrator is revealed to be Magus—Adam Warlock’s evil doppelganger and possessor of the Soul Gem. But for all Magus’ ability to see the rest of the cosmos, the next few pages of the issue have quite a surprise for him. After the story’s conclusion, the issue offers several pages that detail the saga of the Infinity Stones as seen in past Marvel comics.

The true shock of Infinity Countdown Prime #1 is not that it’s good but that it was written by the same person who wrote Infinity Countdown: Adam Warlock #1: Gerry Duggan. This issue smartly recaps the Infinity Stones on the first page and their saga on the closing pages; that decision relieves Duggan of having to explain the stones in-story through cumbersome dialogue. As a result, this issue has a more cohesive through-line based on the greed and desire that motivates many of the people hoping to possess an Infinity Stone. Wolverine’s story in the opening pages has a plot: a beginning, middle, and end during which Wolverine has an expressed motivation as opposed to just being acted upon or moved about. The remaining vignettes, save Captain Marvel’s, lack plots but do establish traits and motivations of the characters they feature. Magus’ narration ties all of the scenes together (including Wolverine’s) and ultimately brings the reader to Magus’ own vignette where he imagines himself the person who will assemble all the stones and reorder the universe. 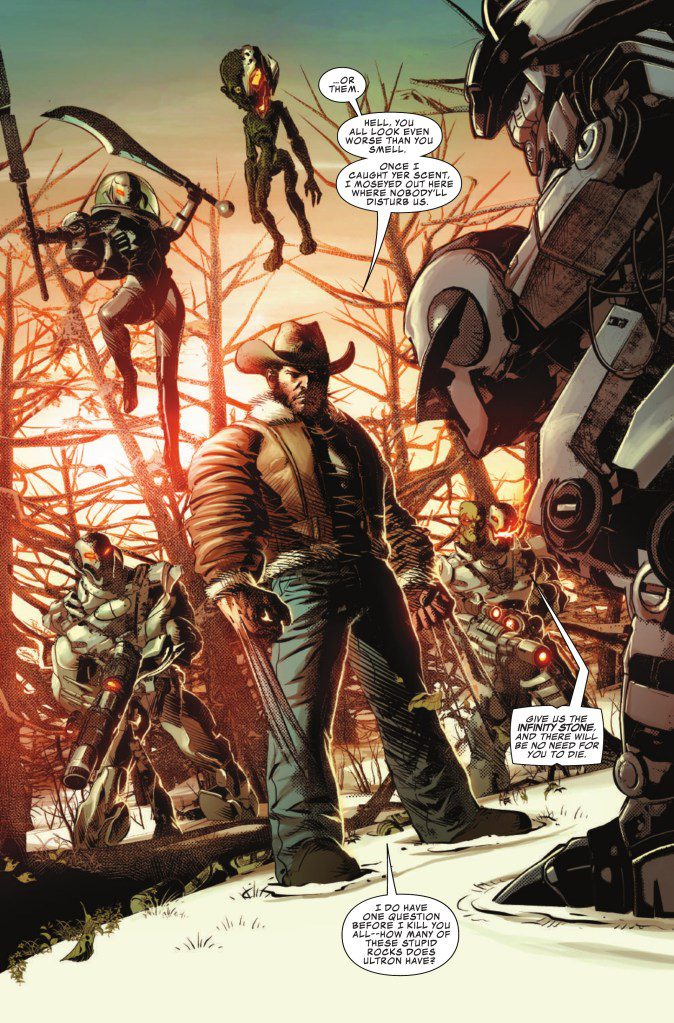 Helping Infinity Countdown Prime #1 maintain its cohesive story is Mike Deodato Jr’s art and Frank Martin’s coloring. Every scene in the issue has an almost dreamlike quality. Whether it’s Wolverine in Canada or the Guardians of the Galaxy in space the characters and foreground are crisp and detailed while the backgrounds are spare and thrown to either bright light or shadow. The color used on the main characters is uniformly more vibrant than what surrounds them in the panel. The effect of all of this serves to underscore the story’s cosmic nature and the somewhat ethereal quality of the Infinity Stones’ powers.

Something I found myself bothered by when I didn’t like Infinity Countdown: Adam Warlock #1 was that it felt like something was missing. It wasn’t until I read this issue that I realized what it was: Adam Warlock wasn’t funny. One of the more significant components of Gerry Duggan’s storytelling in Guardians of the Galaxy was the humor in the dialogue. Infinity Countdown Prime#1 isn’t a comedy but Duggan slips in moment-appropriate humor throughout the story, and it helps build interest in an issue that, going in, the reader may know is potentially superfluous.

Infinity Countdown Prime #1 should have kicked off the Infinity Countdown mini-series. It introduces all the major players and is an interesting story in its own right. It’s made better by the decision not to try and shove Infinity Stones 101 into the story via awkward and clumsy dialogue but to tell it instead as prose. The art established a mood and maintained it throughout the issue. In my Adam Warlock review, I wrote that recap books could be done well. Infinity Countdown Prime#1 is an example of one being done very well. Adam Warlock left me feeling dubious about the upcoming mini-series, but Prime has renewed my excitement.

comics do you even comic book Gerry Duggan infinity countdown prime Marvel Comics
Are you an Insider?News, reviews, & updates are just the beginning.