Interview with Deanna Russo from “The Ice Cream Truck”

Everyone is familiar with the sounds around their neighborhood. Each section of town is unique with different noise within it. It could be the kids frolicking up and down the street. To the neighbor’s loud exhaust pipes from their Toyota Celica’s as they drive down the street. However, one sound is recognizable from city to city. Hell even from state to state. That is the all too familiar sound of the Ice Cream Truck. Hearing the pleasant sound of “Pop Goes the Weasel” as it blares from the speaker on top of the truck is heaven to kids and parents alike. Usually, inexpensive prices and also a nice cold treat on a blistery hot afternoon is pure bliss. Well after watching this film your image of the Ice Cream Truck could be tarnished forever. 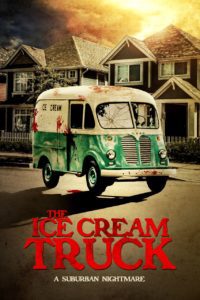 The provocative psychological thriller stars Deanna Russo (Being Human, Gossip Girl, and Powerless) as Mary, who moves back to her suburban hometown after her husband gets relocated for work.  As her family ties up loose ends back home, she moves into their new house alone. And although the move makes Mary nostalgic for her youth, there’s something very sinister about that Ice Cream Truck that patrols her suburb.

Recently I had a chance to ask Deanna Russo a few questions about her acting career and also about her role in The Ice Cream Truck. Enjoy the interview!

GWW: You must be sad to see Powerless go! What a fun show that was! How was the experience of playing Crimson Fox?

Deanna Russo: Oh man, Powerless was a dream come true. Who doesn’t wanna be a superhero? And that cast! Big fan of all of them. I’m a huge Star Wars fan, so to talk to Alan Tudyk about Rogue One the week it came out was pretty rad.

Have you seen this:
The Eerie World of The Promised Neverland Season 1 (Review)

My acting experience on that show was crazy because they were still retooling the story so my character’s presence kept changing. We re shot my scenes so many times, and then most of them were cut. Turns out the costume that took 6 weeks and 4 teams to build for me was divisive among the powers-that-be. The design made for a cool sketch but a controversial execution. The character was SO COOL though! She was written hilariously.

GWW: You’ve worked on a lot of rather huge productions –– aside from Powerless, you’ve also been in such series as Two and-a-half-men, Knight Rider and C.S.I - how do they compare to working on something smaller, with an indie budget, like The Ice Cream Truck?

Deanna Russo: You’ve done your homework! You know, television moves pretty quickly, and so do low-budget films. You have to get it right in the first few takes because that’s all you get. There are many more people behind the camera for TV, though. And they have trailers for every department! With indie film, it’s easier to learn everyone’s names.

GWW: Is it less stressful and demanding working on a smaller scale production?

Deanna Russo: Yes and no. On one hand, it’s less stressful because the stakes are lower. You don’t have to worry about being fired every day.

On the other hand, it can be more stressful if you don’t know what you need as an actor to prepare. With bigger scale productions, you have the opportunity to sit somewhere private and work on your dialogue. For scrappy projects, you have to be more proactive about boundaries and diligent about doing your homework.

GWW: What was the initial appeal for you in working on The Ice Cream Truck?

Deanna Russo: I loved the character, Mary. She was so immediately relatable.

GWW: Is this your first lead in a film? If so, how did it feel having to ‘carry’ a film?

Deanna Russo: I was the lead in a Lifetime movie called Do No Harm (not to be confused with the TV show starring the formidable Steve Pasquale). Self-care is key when carrying a film. Like with any demanding schedule, get your rest and stay hydrated. And keep your ego in check.

And then hide your head in the sand when it premieres.

To be totally honest, cuz I like you, I’ll admit that I’m such an introvert. The spotlight required as a lead has always haunted me. I know it’s weird to want to star in something and then run and hide, but what can I say, I’m intriguing like that. Going back to Powerless, I learned a lot from Vanessa Hudgens about how to handle being the lead. She was so lovely and gracious, almost like a royal. I say ‘almost’ because she still remained so accessible to us all. Like one day, the crew surprised her with a birthday cake, and after she blew out the candles, she said a short thank you speech, and I was awestruck. If I had been surprised with a cake, I would have cried and run away. I’m not exaggerating. I literally did that on Ice Cream Truck when the crew surprised me with a gift for my daughter’s first birthday. I straight up wept and ran away. I couldn’t handle the generosity or attention. I think it has to do with feelings of worthiness. See? I went all introspective on ya. I’m great at parties.

GWW: One last question since I see you have to go. .You’re originally from Jersey. When you go back home to visit do locals treat you any differently now?

Deanna Russo: You know, no one in my immediate family lives in Jersey anymore! It’s a bummer to be sure. I love my extended family, so I try to go back and see them as much as I can, but it’s not nearly as often as I’d like. What’s great is no matter how long it’s been since I’ve seen them, it’s like no time has passed. We pick up where we left off. They’re the best.