On November 11, 2017 at about 4:00PM, I had the pleasure of interviewing Christopher R. Paniccia. He’s the author of critically acclaimed book “Gridiron Conspiracy:Chasing Shadows”. He was gracious enough to sit down with me. Here’s what he had to say: 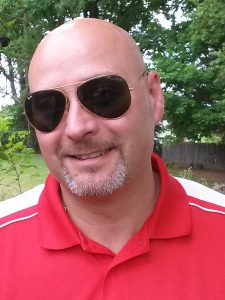 Andrew: Hi Christopher, what inspires you to write and illustrate?

Christopher: I was inspired by the 70’s, Star Trek, Star Wars, Doctor Who.

Andrew: So where are you from and what do you do besides write, publish, and illustrate?

Christopher: I am from North Providence, RI. I did a stint in the Active Duty Air Force for five years and Air Force Reserves for five years as a Pararescue Jumper (PJ) and got out because the advancement was not there to get promoted. Others with less points and experience were being promoted ahead of me. Right now, I teach teachers at Bridgewater State University.

Andrew: Chris, can you explain the art that you are selling at your booth?

Christopher: What I do is called Scratchboard and Printmaking. It is basically the opposite of black ink on paper. I take a black ceramic board and scratch away until only white is shown to depict whatever it is that I am trying to create.

Andrew: What has been the most memorable experience you have had so far.

Christopher: That would have to be meeting Stan Lee, the man who paved the way for writers and artists like myself. It was important meeting him since he is the one who broke so much ground for the comics genre.

Andrew: Which characters or properties do you enjoy working on the most?

Christopher: I enjoy creating characters that make the reader feel like they are part of the story. I like to have that special connection to the characters that are relatable.

Andrew: What is your favorite comic book movie?

Andrew: Okay, fair enough, I thought that was an excellent movie. I loved Gal’s performance.

Andrew: How long have you been doing Comic Cons?

Andrew: Okay Christopher, last question. Which artist or writer do you most identify with and why?

Christopher: Stan Lee because of his willingness to take on new challenges.

Andrew: Okay Christopher, thanks for your time and best of luck during the comic con and all your future endeavors.  I’ll get this printed up and send you a copy.

Christopher: Okay Andrew, thanks and best of luck to you too.