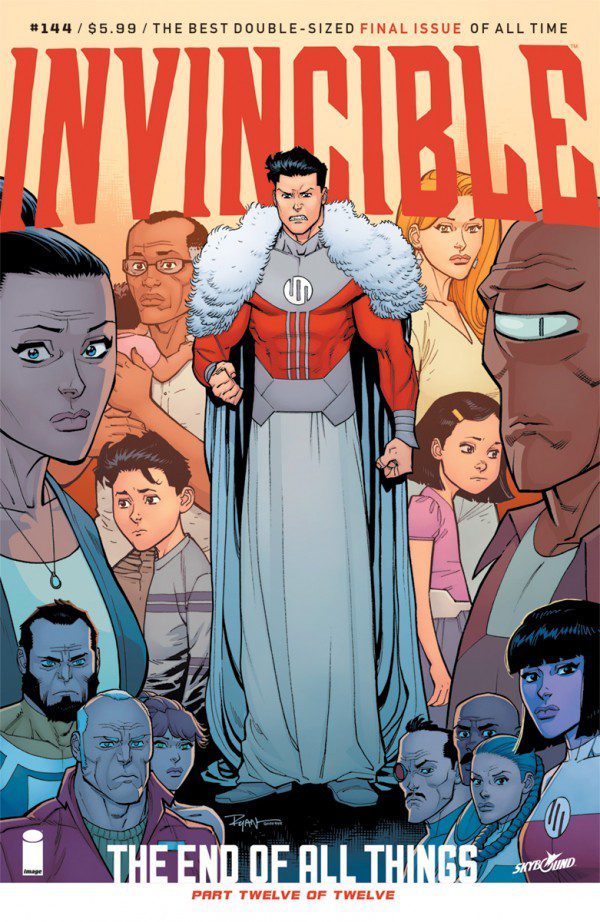 We’re finally at the end with Invincible #144 and what a ride it has certainly been. I was glad to see the final issue be an oversized 48 pages and it certainly helped to effectively close all doors, and give us a look at what Mark Grayson as the new leader of the Viltrumite has accomplished throughout his life. First though, the final issue shows us a conversation between Mark and his son Markus. While giving us a great callback to the beginning of the series, this also shows the type of character Mark is trying to be from here on out. He doesn’t hide anything about their people’s history to his son and also believes that he will do some good with his powers. I’m sure he would’ve brought Markus along if he hadn’t already had a father figure to raise him but at least he still has other family members to go to on Earth.

The rest of the issue is quite a treat to read. While initially going in, I thought this issue would end on Mark leaving Earth after resolving the complications with his son as he waves goodbye going off into space. However, we get something far better than that. I don’t want to go too far into details of all that happens but the best thing out of this issue was seeing Mark’s life continue beyond Earth and even see where a few other people end up going in their lives. From the moment he got his powers, Mark wanted to always do what he believed was right. He took a few missteps along the way but all of that has built him to be leader he is now and it truly feels like he is accomplishing what he has always sought out to do, just on a scale much larger than he could’ve ever imagined.

We get a slightly larger team in the art department for this issue and it does not disappoint. We still get many great panels with some fantastic artwork and the colors still pop as bright as ever. One of the best things about Invincible has always been its art and how regardless of the scenario, it felt like a fun superhero comic. Rus Wooten does a great job with the lettering work and as Kirkman mentions, letterers don’t get enough credit.

The legacy Invincible leaves behind is something only so many books have accomplished. The final issue gives its readers everything that made the series what it is and why it will always be highly recommended to new readers. Invincible has truly earned his place among the list of greatest superhero comics of all time.