When a comic fan hears the title “Detective Comics” they immediately flash to images of Batman swooping over Gotham City rooftops, but what if I told you that one of the most recognizable titles, the very title that DC Comics is named after, had a less than illustrious start? In fact, what if told you that this beloved series began with one of the most racist comic covers of all time? What if we walked down memory lane and take a look at some of the biggest botches in the early history of DC’s biggest title? Welcome to the first installment of “Issues Have Issues”. In our first installment, we look back on the worst covers of the first 1000 issues of Detective Comics.

So let’s start at the beginning. Issue #1… but most fans forget that Batman didn’t premiere in this series until issue #27. So what started off Detective Comics…OH MY GAWD! 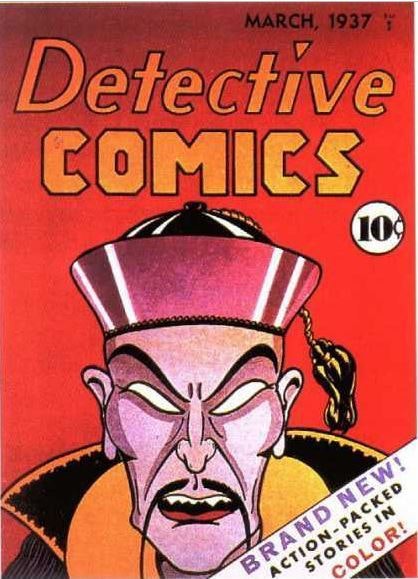 To say that the cover for Detective Comics #1 was racially insensitive is a HUGE understatement! The only thing missing from this racial stereotype is text on the cover reading something along the lines of “Me so funny, me play joke, me put pee-pee in your coke”.

Who gave this the green light? Was this a great marketing ploy in the 1930’s? “Hey boss, I gotta great idea for a new comic, but to really sell it to the kids I need to have my KKKlansman-Cousin draw us a cover! No, trust me! The kids today love racist comics.”

It definitely was a different world back then. Let’s hope that’s the last time we see blatant racism during this article. 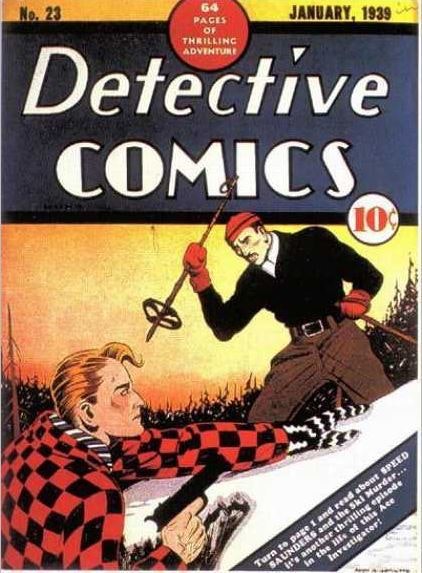 Ok, so let’s step away from the racist undertones and talk about the number one killer of private investigators; ski-pole wielding lumberjacks. Just when you think it’s safe to investigate murder and intrigue in the woods, Boom! You’ve got maple syrup swigging French-Canadians trying to turn you into a private dic on a spit. Fucking Canucks! 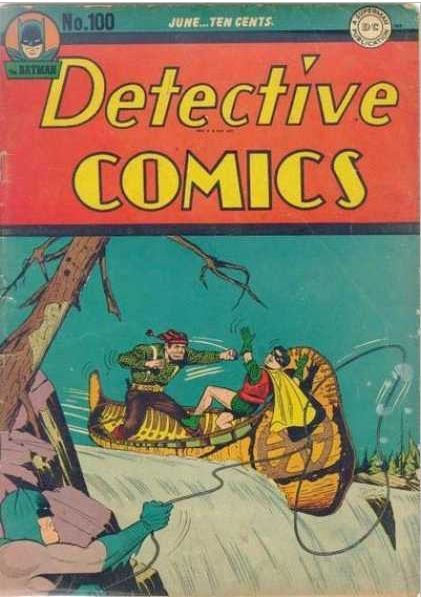 Here’s our first appearance of the Dynamic Duo of Batman and Robin on the cover of Detective Comics. Those damn Canucks are at it again, this time choosing to fist-fight on a waterfall, in a canoe, while wearing a dashing suspenders-Flannel-bedtime cap combo.

Here is the real question, is Batman hoping to lasso the entire canoe and pull it to safety or is he throwing a lifeline to the Boy Wonder? Considering that Batman has no qualms about placing children in harm’s way, I’m guessing that Batman is trying to score a sweet, free watercraft. 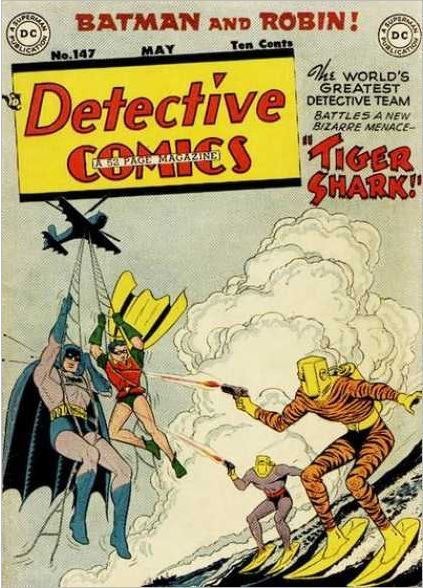 So here is a great example of “What the Fuck?” There is so much going on with this cover. Let’s break it down. First, what is with the tiger print swimwear with the yellow leather accents? Was this ever a legitimate fashion choice? Even in the swinging 60’s?

What about the footwear? Is each foot connected to its own mini-surfboard? Or is this a modified flipper? How is this a good idea for criminal footwear? Does aquatically themed footwear lend itself to being good in stealth for crimes?

Also if you have each foot hooked into a surfboard, your face covered in a yellow leather-daddy scuba mask, and two guys swinging towards you on rope ladders, would you really think it’s a good idea to whip out your pistol and fire wildly into the air? The odds of shooting yourself or your buddy are astronomical!

And who is this sidekick to “Tiger Shark” (or as I like to call him, Scuba-Steve #1) How did he get roped into his friend’s ridiculous plan? “Hey, Gary! Listen I know things have really been slow for you since the plant closed, but I know a way to turn that frown upside down (hands over a grey diving suit with yellow accents) … put this on and I’ll explain everything in the car.”

And let’s just take a minute to appreciate the Bat-Copter/Jet…is it a chopper? I see helicopter rotors above the aircraft, but the body style is of a plane. Was Bruce building hybrid experimental aircraft in the 40’s? And just who is flying that monstrosity while both Batman and Robin climb down two flimsy ladders? Is Alfred in possession of an experimental jet license? And where did he find the time to acquire said aviation authorization? TOO MANY QUESTIONS! 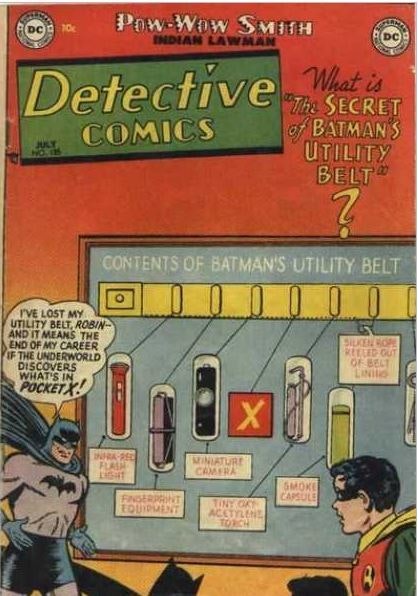 What is in pocket X of Batman’s utility belt? It’s something so vile that it would lead to the end of his vigilante crime-fighting career. You know what’s in that pocket. Tasteful nudes of Robin. 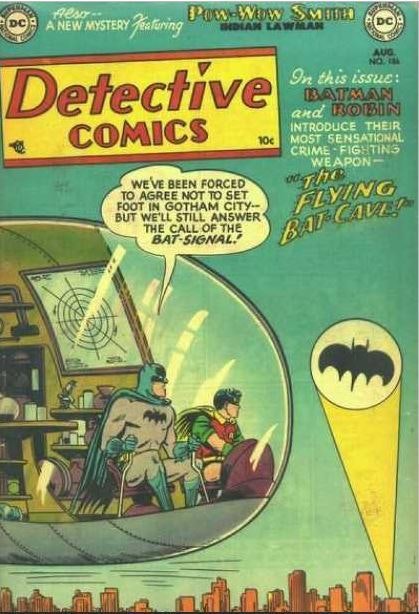 1.- Is that or is that not the worst Bat-signal ever put on paper? It looks like a giant moth. C’mon DC! Get it together!

2. A flying Bat-Cave? So once again we’ve wandered into the experimental aircraft territory again. This time let’s stock a plane with beakers, microscopes, charts, graphs, and I’m going to assume a full laboratory of volatile chemicals and potential explosives and fly it over the heart of Gotham. Why? Because Batman can’t set foot in Gotham. Wait, what? Isn’t this the same vigilante crime fighter who illegally apprehends criminals and puts an underage kid in harm’s way? Now he is a stickler for the law? Seems a bit moot doesn’t it?

Plus isn’t this the ultimate douche bag move to undermine the law? It’s the Batman equivalent of a little kid pointing his finger at his sibling and repeating “I’m not touching you, I’m not touching you!” “I’m technically not touching the ground in Gotham, you can’t arrest me”. UGH! 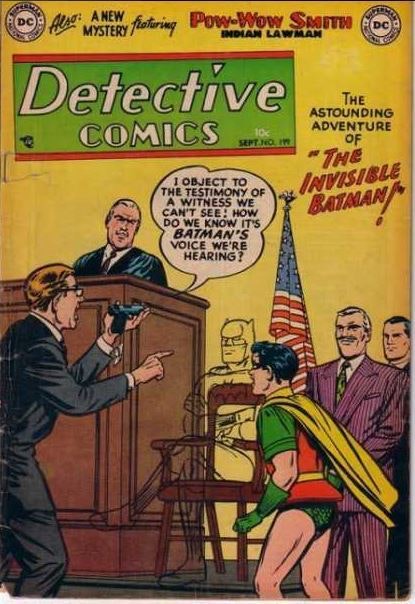 Ah yes, the old invisible Batman trick. Used in courts all across the country. Your witness doesn’t show up in court? Just call on invisible Batman! All you need is a little ventriloquism and a lot of luck!

I’m really more curious about this issue promising the adventures of Pow-Wow Smith, Indian lawman. With the cover of #1 still stuck in my mind, I’m assuming the stereotypical worst. But how bad could it have been? 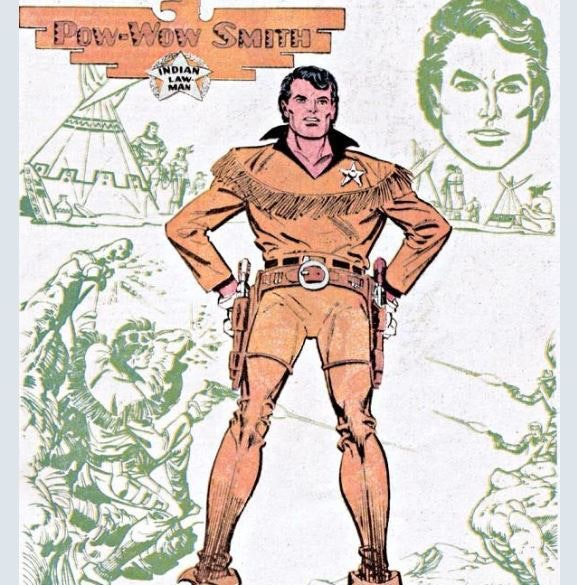 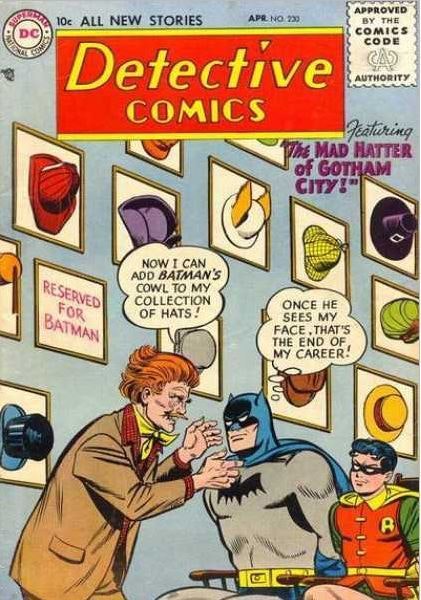 I think we can all think back to that classic tale where the caped crusader had his crime-fighting career ended by a crazed habadasher. Oh, those damn hat collectors! Wearing their ballcaps backward and listening to their jazz music! Disgusting! 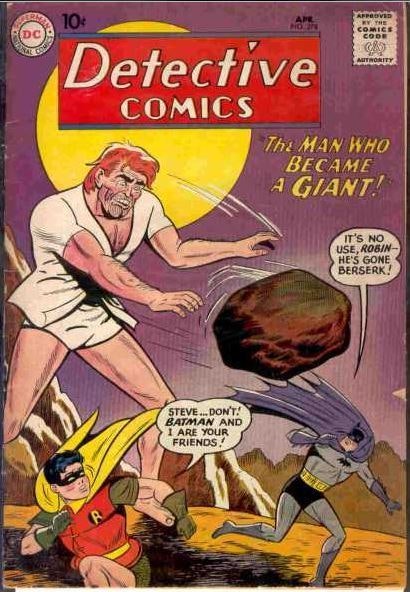 His name is Steve and he’s gone berserk! Watch out when giant Steve loses his temper and is forced to chuck boulders in his shorty shorts. The 1970’s NBA wardrobe called and it wants to warn you about hanging “little Steve” out your trousers the next time you lean over to pick up a rock to throw at a man dressed as a Bat. All fear giant Steve! 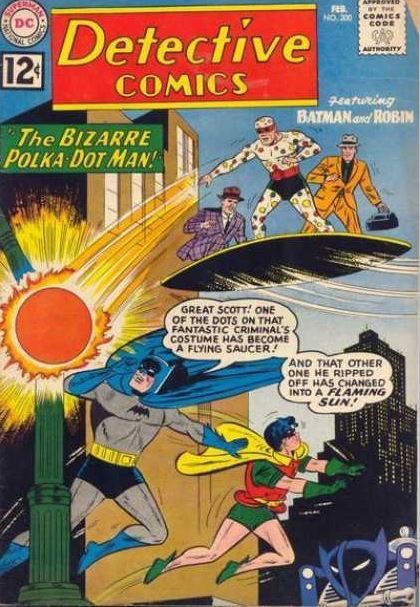 From giant Steve to a man who dresses like a package of Wonder bread. Batman’s greatest foe isn’t the Joker, it’s this moron and his polka dotted costume. One of those dots can turn into a sun! What?!? How is that safe to have on your body? Does he have to create a supernova to ignite this mini-sun? Does it generate its own gravitational pull? What effect does this 2nd, smaller sun have on our atmosphere? Is this the real reason behind global warming? Get Al Gore on the phone. We’ve found the perpetrator destroying our Earth! 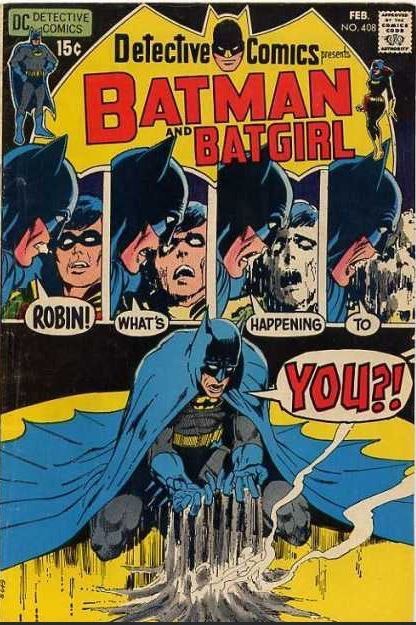 Proving once and for all that Avengers: Infinity War ripped off DC. 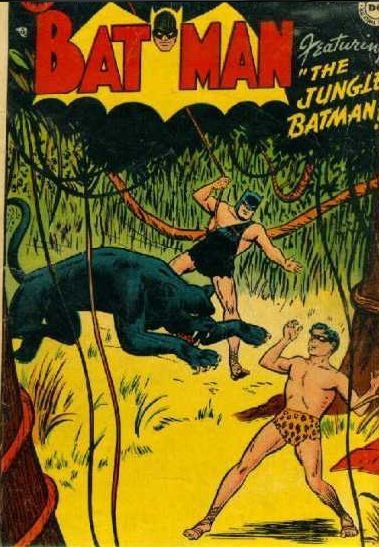 Last, but not least, I’ll leave you with this amazing cover of Jungle Batman. What is more concerning in this picture? Is it the way that Batman and Robin are dressed? A cave-man style toga and leopard print briefs. OR is it that even in the darkest parts of the wild the Dynamic Duo feels the need to still wear their masks? Who the hell are they hiding their identities from? The local wildlife? At least that Panther doesn’t know that it’s really fighting billionaire Bruce Wayne!

So, there you have it fans. As Detective Comics prepares to celebrate its 1000th issue, let’s hope that there will be more hidden gems in the years to come. Join me next time as we delve deep into the covers of Action Comics and Superman takes his turn in the barrel of laughs.

***All copyrights and trademarks belong to their respective creators and owners. This article is written in a spirit of fun and parody. Geeks Worldwide does not claim ownership or rights to any images or characters contained within this article.