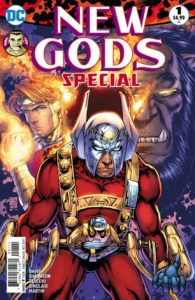 DC Comics has released this New Gods anthology special celebrating what would have been Jack Kirby’s 100th birthday. This is a great issue that for new readers who aren’t familiar with the New Gods or haven’t read the original run by Jack Kirby. For long time readers, this is a great chance to reminisce about the king of comics.

This segment which was written and drawn by Shane Davis is probably the best way to get introduced to Orion even though I think it’s a retelling of Forager’s origin story. You learn about Orion’s heritage and the kind of person he is. This also features New God characters Lightray and Kalibak. The story and art were really good. This was probably the longest segment in the anthology, so it was more fleshed out than the others.

Teeth of the See 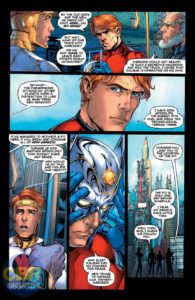 This tale of young Orion saw the return of comic legend Walter Simonson to DC Comics. He wrote and drew this short story that focused on the relationship between Orion and Seagrin. It was an interesting story with some great looking art, but it was really short. The highlight of the segment is probably the design of each creature that inhabits the Unholy See on Apokolips.

Two reprinted stories from Jack Kirby’s run on the Forever People. Both deal with Lonar and his warhorse Thunderer, the second story introduces the horse to Orion. I’m not about to review a classic series by the Jack Kirby but I will say, I’ve never read any of the original Forever People before and these were great. Like the last segment it makes you want more. Some of the older Marvel comic books were a little too dense for me to enjoy. Everything I’ve read from the New Gods has been a joy to read.

All around this was a neat issue that anyone could enjoy. This comic features wonderful art highlighting classic characters and stories. I believe all the reprinted Kirby pages were recolored. There are also some neat inserts in this issue too, like the Jack Kirby Grabber page, and the end of the issue that features an excerpt from the book Kirby: King of Comics.

This really does make you want to pick up something from Jack Kirby’s New Gods.