Jack Russell will always be Great White, and Great White will always be Jack Russell. No if’s, and’s, or but’s about it. With that being said I am starting to get perturbed at all the musicians fighting over names of  their band. In some cases you have two versions of a band touring. Stop the madness and just get back to bringing us good ol’ metal that we can rock out with. 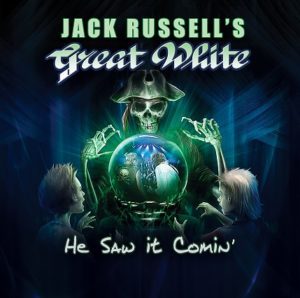 Jack is back but this time he is the frontman for Jack Russell’s Great White. Their new album He Saw it Comin’ comes out on January 27th. The band is made up of Tony Montana (Guitar, Keyboards), Robby Lochner (Guitar), Dan McNay (Bass), Dicki Fliszar (Drums), and of course Jack Russell on vocals. I expected a good album with Jack’s golden throat and Tony Montana’s hooks and riffs on the guitar. The opening track Sign of the Times had my foot tappin. I was instantly taken back to the Glam Metal days of the eighties. However that joyus feeling I had did an about face and left me bewildered and confused for the remainder of the album. The next song She Moves Me slows down a lot and has a bluesy - rock feel to it.

Have you seen this:
A BOY AND HIS BLOB (REVIEW)

Now blues rock is not the problem. It is Jack rapping half way through the song. I believe rap has no place in metal. Unless it is Anthrax’s I’m the Man. This whole album suggests that Jack is lost in finding his new sound. Further evidence is the last song on the CD titled Godspeed. This is an acapella Doo Wop song. Something you would find in a malt shop of years gone by. Closing the album out with this song just left me with a sour taste in my mouth.

Overall this album has three songs on it worth a listen and even buying. Sign of the Times, Blame it on the Night, and Crazy. Hopefully if there is a next album Jack will stick to his bluesy - rock anthems and leave this other mumbo jumbo alone.