‘Jack Ryan’ Spoiler-Free Review: A Generic Yet Interesting New Turn For The Franchise

Amazon’s newest original series ‘Tom Clancy’s Jack Ryan hit screens this past’ Friday to what feels like a lukewarm reception from audiences and critics alike, and while this show manages to hold its own among other military dramas like ‘Seal Team’, it does not pave its own path in terms of creativity.

The show starts off with a bang but for some reason decides to slow itself down, which didn’t feel right given that it’s only eight episodes, which feels like a short enough season to keep the characters and audience on the edge of their seats. Only a few heated and tense scenes take place between the next few episodes, but once episode six starts, it doesn’t cool back down until the show is over. Frankly, everything despite the subplot involving the antagonist’s wife is rather boring throughout the first five episodes, and once episode six is reached, the other storylines begin to pick up.

I’m not sure what quite happened, but for someone reason, John Krasinski only had about four facial expressions to use throughout the entire show: smile, frown, confused, and glare. There’s a big problem when the titular character is the least interesting. Krasinski had no chemistry with Abbie Cornish, who plays his love interest, Cathy Mueller. It didn’t even feel like he had that big of a role for a show that’s supposed to focus on him. Despite Krasinski’s usual charisma, the writing for his character wasn’t quite good enough for him to shine brightly.

Abbie Cornish’s Cathy Mueller was another character that felt pointless, but with a good payoff in the end. The writers seemed to fail at strong protagonist here as well, without an uninteresting personality helping kill any chemistry that could have possibly been salvaged between her and Krasinski.

Wendell Pierce excelled at playing analyst James Greer, friend and mentor to Ryan. This is the character who we should have a much larger role than he did, given the fact that a focal point of the show is about the Muslim religion and discrimination, which applies to his character well since Greer converted to Islam due to his ex-wife being of that religion.

Another subplot, which felt random at first, was another incredible part of the show that explored the emotional toll that comes with having a job in the military where you sit in a trailer kill people using a drone that’s being controlled from 10000 miles away. The guilt and trauma that comes with a job like that is such a compelling thing that is explored over the course of the show. 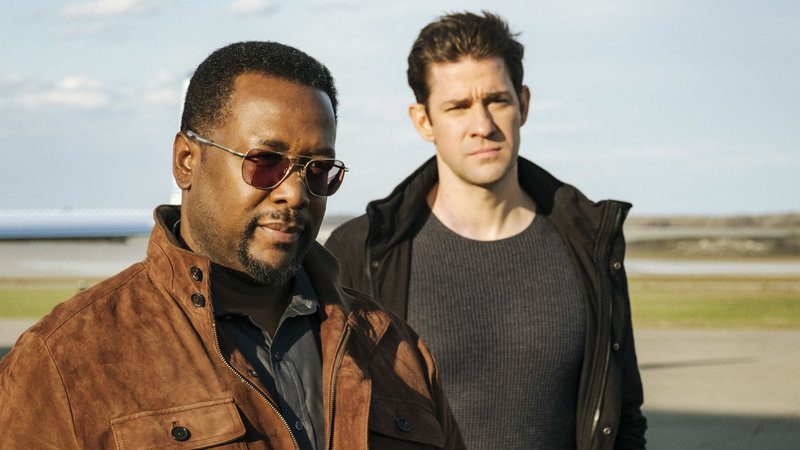 Onto the best part of the series: the antagonists.

Islamic fundamentalist Suleiman, played by the incredible Ali Suliman, is the perfect example of how every villain should be developed. Suleiman’s motivations were so emotionally driven that if it hadn’t been for the fact that he is a murdering psychopath, you could really feel for him. If they had spent the time to develop Ryan the way they did Suleiman, this review would be a lot different.

Despite how great Suleiman was, the strongest part of the whole series was his wife: Hanin. Played by Dina Shihabi, Hanin was compelling, raw, and arguably one of the most sympathetic characters to grace the small screen in a number of years. A woman who would do anything to protect her children, she is definitely one of the most empowering women in television today.

The generic part of the whole show is the overall story: Terrorist plot with the plan being bigger than expected, a few misunderstandings or two, a major character death or two, and the usual character or two that don’t seem at all important but end up being integral to the story. No huge twists, nothing new or different, but overall very good.

Now despite all my complaining, I had a lot of fun binge watching this show and am glad it was renewed for a second season because it can only get better from here. Despite its weak protagonists, it had an incredibly harrowing story which everyone should get to experience.