Jem and the Holograms: The Misfits: Infinite #2 REVIEW 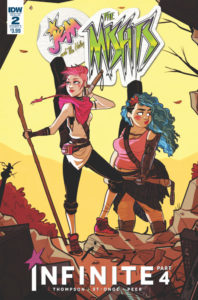 Jem and the Holograms: The Misfits: Infinite #2
IDW Publishing

I have been waiting for this issue since The Misfits set off on their own in this new world. Having already gotten a good feel for what “Jem World” is like, but I wanted to know what beyond the wall. This issue did not disappoint, either! This issue drops us right into the real world, the other 99% as it were. Things are rough, people are just trying to survive, it is exactly what I was hoping 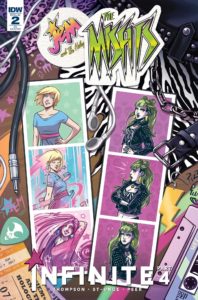 for. I know that sounds bad, but as a comic fan, I want to know that the evil corporation is actually being evil. It is in this dystopia that we learn to love The Misfits again.

When IDW released the Misfits series, we got to see a softer side of these hard rockers. In Infinite, we find out what they are really made of. They have to take their new-found knowledge of what JemCorp is doing and decide if they are going to fight or flee. My money goes on fighting. Similar to the previous Jem issue, this one is setting up the next part of Infinite.

Unlike its counterpart, this once moves very swiftly and you do not want it to end. I need at least ten more pages of the badlands, and to meet a couple extras in there. Kelly Thompson and her team just keep us wanting more!