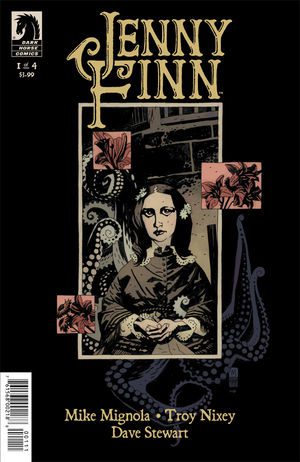 I wasn’t sure what to expect when I went into Jenny Finn. How funny did it turn out that the character Joe whom we tag along with throughout this first issue seems to be in the same boat after meeting the girl from the book’s title? At first, it seems like the book may be a mystery series. Murders have been happening to the whore’s of the town and I thought Jenny Finn would be introduced as someone caught in the middle of all of this in the grisly setting of Victorian London. Jenny Finn actually surprised me as they seemingly hold nothing back in this first issue. Not only is someone murdering women, but men have been turning up infected with some type of disease that appears to be from the sea. I figure some of this may be due to mostly fish diet in this town of people but we still don’t know why this has been happening.

Later on, we’re given some type of a hint but we just don’t know why. Joe seems to be a very kind-hearted, strong man and his curiosity has seemed to get the best of him. We briefly meet Jenny Finn through him but she doesn’t stick around long. You’ll notice she is given strange looks from the townspeople from disgust to love. I really enjoyed just how uncomfortable everything feels as Joe walks through the town and everyone is in a panic about what has been happening. We even get to a point where kids decide to go inside their homes. Joe asks them why and they tell him it is because the dead whore’s spirits walk the streets. Now here I thought it would just go on to be shown something as a trick later on, but wouldn’t you know it. Ghosts show up and that even brought a bit of a surprise to me. I think the most pleasant thing about the book is even though we are given such little information about the little girl named Jenny Finn. I was still intrigued with all of the mystery going on in the town. This series appears to be set up for a 4 issue mini-series and in one issue, we are given plots about a murder, men getting sick with some weird infection, ghosts, and it all appears to be tied around Jenny Finn. Anyone fond of mystery and horror should not think twice to see where Jenny Finn could take them.