Jessica Jones Season 2 jumps right back into Jessica’s (Krysten Ritter) life as a super-powered P.I. She’s working investigation jobs here and there, but still trying to lay low. She’s extremely touchy when people call her a vigilante, and seems to be trying to get her life back to whatever it was before Killgrave (David Tennant) and The Hand showed their faces in New York.

Malcolm (Eka Darville) is working for Alias Investigations, trying to help with the business and keep Jessica moving along as best he can. Trish Walker (Rachel Taylor) has gained some notoriety with her talk show, from talking about her anonymous super-powered vigilante friend. Jessica isn’t exactly excited for Trish to be talking about her exploits with the Defenders, but Trish assures her that she is keeping Jessica’s identity confidential. Trish, trying to be a good friend, has also been trying to convince Jessica to move on, and start dealing with some of her past. Good ole Jessica would much rather drown those problems in booze. 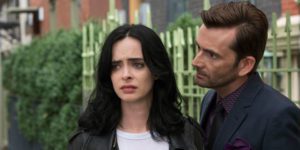 This episode does a lot of re-establishing the status quo for Jessica. It peppers in just enough references to the previous season, and The Defenders, without beating you over the head with references. Jessica Jones was my favorite of the Marvel Netflix shows so far, so if you haven’t seen season one yet, go do what Netflix was intended for, and binge it in a few days!

Ritter was and still is amazingly cast to portray the moody and haunted Jones. I appreciate her execution of snark, wit, and cynicism. It really helps me connect with that character.

Even though this is mostly just resetting the status quo, there were some great surprises, and very enjoyable character moments already. I’m absolutely ready to see what else is in store for Jessica Jones.