After the conclusion of the previous episode of Jessica Jones, Jessica and Trish find themselves dealing with a messy aftermath and some shocking revelations. Who really did this to her and who else is it affecting? I sense a bit more empathy in this episode than I have in any of the previous. There’s a lot of paranoia building in this season thus far and now it’s not just Jessica always looking behind their back.

Just like I said about episode 3, I feel like Trish is facing as many demons as Jessica. The paranoia and ‘mommy issues’ shine through. She’s going to lengths to meet a mysterious person Jessica may have uncovered and it may not safe for anyone. 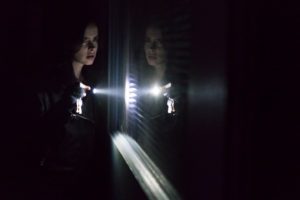 There are quite a few more threats in season two than just Killgrave which I’m really enjoying. Even though this only episode three it’s already quite a bit more complex. Trish is taking on a bigger role and branching away from Jessica quite a bit and I’m very excited, and a bit nervous, to see how her character progresses. There are now a few new characters introduced that I’m wary of. The show is written in such a great way that it has kept me guessing. The end of this episode was fantastic! Jessica’s detective skills with Trish’s research obsession is really pay off.

jessica jones Marvel Marvel Netflix netflix
Are you an Insider?News, reviews, & updates are just the beginning.