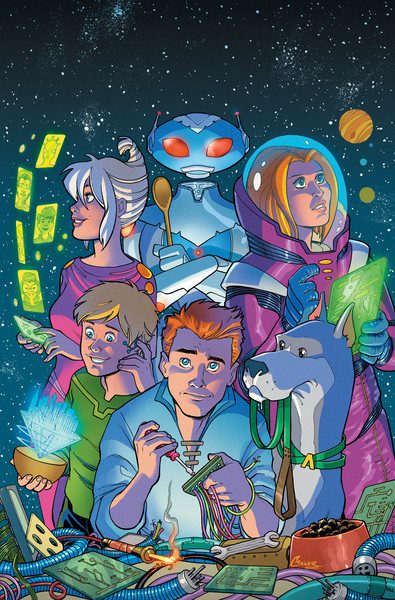 The classic Jetsons cartoon was rooted in the hope of a better future.  While Hanna Barbera’s Flintstones was a nostalgic look back on a simpler time, the studio’s Jetsons was a hopeful look forward to a world of potential. DC’s recent interpretations on Hanna Barbera properties subverted expectations. Wacky Racers became a post-apocalyptic survival, Scooby-Doo became a zombie hunter, and the Flintstones became cultural critics. Jimmy Palmiotti’s Jetsons continues this tradition and subverts expectations as well. Instead of a world filled with a hopeful future, Palmiotti’s world is filled with a sense of dread.

This is not to imply that the Jetsons is a bleak future. Technology is a marvel. Cars fly, cities float, and robots take care of the family. Showers still automatically adjust the temperature. But Palmiotti creates a world with a deeper context and this issue hints at his willingness to raise challenging questions. Rosie the robot now contains the consciousnesses of George Jetson’s mother which leads to a conversation about science, spirituality, and the afterlife. Palmiotti does not get preachy about the topic, nor does he cast judgment on humanity for decreasing the world’s land mass by 22% due to rising sea levels. Palmiotti approaches this six-issue miniseries with both logical science and emotional feeling. 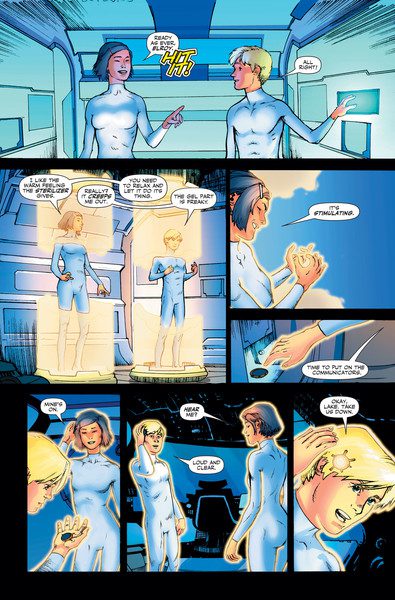 Jane Jetson is a leading scientist working to prevent another meteor from hitting earth. Instead of evacuating her family in the face of this pending crisis, Jane quietly checks in on her tinkering husband and reminds him that work can wait and that family is important. The work life of George is not the focus in this first issue, which may indicate that Palmiotti has something more to say about the value of family or the fleeting nature of technology. This first issue is more setup, than commentary.

While there are many dialogue-heavy panels, the narrative within them is both engaging and thought-provoking. Pier Brito’s art and Alex Sinclair’s colors are effective in conveying both the future technology and the devastation of a world destroyed by water and a meteor. Brito’s art is inconsistent at times though, Jane’s facial features vary between closely framed panels and wider framed settings. Sinclair’s colors are bright and carry with them a nod to the hues of the classic cartoon while still portraying a little grit for a world built on top of a flooded society.

Jimmy Palmiotti’s take on the Jetsons is still developing. While his world is filled with a sense of the coming dread, there is hope for the story he is trying to tell. The Jetsons’ world is living on borrowed time and hopefully, Palmiotti has something to say about how we, as a world, can either prevent that end or make the most of the time we have.