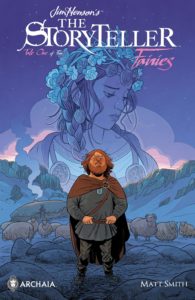 I remember watching Jim Henson’s Storyteller as part of the Jim Henson Hour every Sunday night. Jim Henson has always found a special place in my life and being a fan of folklore, that show was perfection. When I saw the name Henson on a comic come across my virtual desk, I had to jump on it. That may have not been the best thing. While the quality of art and story in this issue are good, they are not what I expected. My nostalgia may have skewed my score on this comic. That being said, this is not a bad read by any means.

In part 1 of this 4 part series, Matt Smith tells us the story of “The Elf Queen and the Shepherd.” This is the story of the elven fairies of Iceland. A Fairy Princess is cursed and exiled into the human realm which means 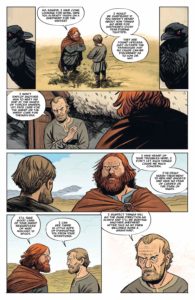 that she will be a mortal. Grettir the Strong has to discover the source of the curse in order to break it. Now I will admit that I know very little of Icelandic mythology, but this story seems awfully thin. In the television show I always felt like I had learned something and then went to find more on my own. This did not leave me with such a feeling. While Matt Smith did a great job of bringing the Storyteller himself back to life, I do not feel he did the same with the characters within the tale.

The great thing about a comic series like this is that each issue is a contained story. If you read this one and it falls flat, no worries, a completely new story is coming next month. I will say that BOOM! Studio’s deal of all 4 issues for $12.77 is worth it if you are looking for some beautiful pages in your comic collection. (The deal was still available as of this writing 12/18/17.)