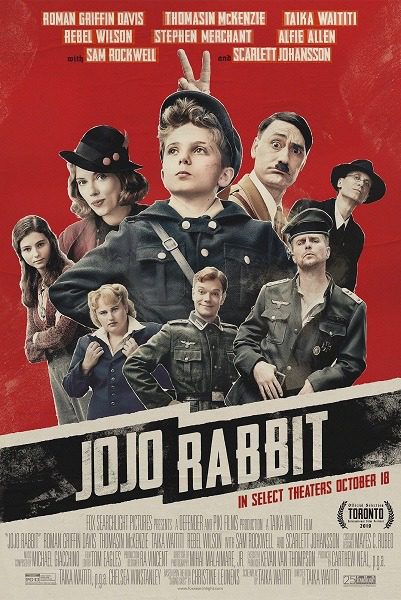 The best satires are those that are at once savagely funny but point to a more serious truth. It’s what made Armando Iannucci’s 2017 film The Death of Stalin such a memorable comedy. While it featured terrific dialogue spouted at rapid speed by an A-list cast, it never flinched from showing the cruelty of Stalin’s Soviet Union. It is surprising, then, that Taika Waititi opted for such a subdued depiction of Nazi Germany in his latest work, Jojo Rabbit.

Featuring Roman Griffin Davis as the titular ten year-old Jojo Betzler, Jojo Rabbit tells the story of a young boy who dreams of being the best Nazi he can possibly be. A dream which is supported by his imaginary friend, Adolf Hitler (Waititi). The concept is one that would raise several sets of eyebrows, yet Waititi opts for a much gentler tone than the concept would imply.

To reflect Jojo’s sunny-eyed vision of Nazism, the first two acts are relatively unserious. Instead, they focus more on slapstick humor and Jojo’s misadventures with the Hitler Youth. Under the tutelage of Sam Rockwell, who shines as an alcoholic, misanthropic captain demoted to training them, Jojo seeks out to be the strongest, bravest, most loyal youth in his camp. These sequences are among the film’s darkest and funniest, and hint at a great satire that lingers in Waititi’s film. We see how children are taught to see Jews as otherworldly demons who can read minds, burn books for fun, and how to toss grenades. Alas, we spend too little time here before Jojo is injured and forced to return home, where the film then spends the majority of its first two acts.

Only around the third act, where the jokes begin to deplete and more serious plot developments take center stage, does the film truly find its footing. It’s here when Waititi finds the tone that should have occupied more of the running time. But far too often, he opts for sentimentality and a warm hug when the film calls for brutal honesty and a bitter laugh. As half-satire/half-coming-of-age story, Jojo Rabbit at least lands the beats of the “coming of age” part well enough. Davis has a wonderful face for acting, and his interactions with Friend Hitler are fun to behold.

But as a satire on Nazism, the film’s defanged approach works against it. All too often, the true horrors of the Nazis are washed over and blunted in favor of more general clownery and goofy accents.

Stanley Kubrick’s Dr. Strangelove works as a classic of satirical filmmaking because the consequences of nuclear war are made all too clear. But no one in the War Room is taking those stakes seriously. There, the machismo nonsense that led the United States and the Soviet Union to the brink of nuclear war reigns supreme. Jojo Rabbit eschews stakes in favor of slapstick and sentimentality, leaving us with a funny, warm film that never crosses over to the truly great satire it could be.