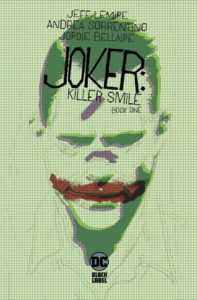 Ben Arnell is the latest psychologist to tackle the case of the Joker. Many young minds have failed to dissect the monster that hides behind the smile and as this latest offering from DC’s black label imprint unfolds Arnell begins to succumb to his own madness. The issue opens with a flashback to the recent killing spree that has landed Joker back in Arkham as the villain gassed hundreds with his Joker toxin. Lemire sets the stage early that his version of Joker plays for keeps and as events unfold you begin to wonder just how dangerous the Joker can be to a normal mind as you watch Dr. Arnell slowly beginning to spiral.

Comic fans were wowed with Lemire and Sorrentino’s run on Old Man Logan at Marvel. A run that established the duo as a powerhouse creative team that could deliver the goods when it came to action and drama. Now that the pair have brought their talents to DC we get to watch these two masterminds take on a fictional madman. Working under the Black Label DC has given the creative team a virtual blank check to work with. This is outside regular continuity and blessedly so as this Joker can swear, be more violent, and not have to be censored for younger audiences. This is setting up to be one of the best Joker tales ever told.

The opening sequence alone is enough to give long-time readers chills as we witness the death of countless civilians who suffocate from a gas attack of Joker toxin…but the haunting image of the Joker himself dancing among the dead is what sticks with the reader. There are moments of hideous violence that is depicted in such a beautiful way that you begin to feel your own mind slipping into the trap that Lemire has set for readers. He wants the Joker to be tempting. A bright shiny button, begging to be pushed, one that will only lead to death and destruction.

Watching this duo work together to perfectly blend story and art is a privilege. Too often I have seen the argument online as to who is the more important contributor to a comic’s success; the writer or the artist. The answer has always been both. It is the seamless flow and transition from text to art and back again that makes this comic stand above its peers. This is a creative pairing that has found their muse. It’s a rare thing in comics to see a writer and artist work so well together, teams like this are worth their weight in gold to publishers. Hire them, give them a subject, and then get the hell out of their way so they can make their magic.

While Lemire and Sorrentino get their just dues, I can’t allow the rest of the art team to go unnoticed. Jordie Bellaire adds to the surreal art by applying the right amount of depth and mood to the colors. The washed-out tone of daylight plays in perfect juxtaposition to the insane brutality of the Joker and provides the right tone for the daily grind of Dr. Arnell. Where Bellaire really shines are the scenes depicting the nightmares that begin to plague Ben. The color scheme of the Joker is reflected in the palette that Jordie uses; greens, purples, yellows and of course red.

While this series is not covering a new concept; we’ve seen what the effects of studying the Joker have had on others like Harley– this is an outsider’s perspective. Unlike Quinn’s dealings with puddin’ here we see the Hannibal Lecter-like monster that the rest of the world is exposed to and the psychological toll it can take. While there is obviously more at play with Dr. Arnell and his personal past with the Joker, this first installment is more of a dissection of the regular human mind running up against the purely insane. One begins to bleed into the other.

There is no better example of this than the children’s book that Ben reads to his son at bedtime. A bloody fairy tale that has cute woodland creatures being murdered by a clown. (A little too on the nose) Ben doesn’t remember buying the book and only later in the issue when the Joker recites a passage does Ben begin to hallucinate and lose his grip on what is real and what has been planted in his mind by Joker.

I personally think that Lemire is driving home the idea that madness is the Joker’s “superpower” and that he has the ability to infect or affect others when they are around him too long. I could be way off base, but its a working theory at this point.

Overall, not a bad start to a new series by a very talented team of creators.