In 2005, Nine Inch Nails released their fourth studio album, With Teeth. Most aspects of the record are produced well, and there are two songs that are of truly memorable quality, but overall, it never comes to a satisfying whole. Nothing about is truly bad or even mediocre, just rather workmanlike.

That quality is present in Destin Daniel Cretton’s Just Mercy. Cretton directed the rivetingly powerful Short Term 12, which makes the more conventional nature of Just Mercy a bit disappointing. It’s a beautifully shot film, never showy or pompous, and pays due dignity to the real life crusading lawyer at its center, but it never quite reaches the levels of greatness it aspires to.

Just Mercy tells the story of Bryan Stevenson (Michael B. Jordan), a Harvard-educated attorney who has dedicated his life to providing legal counsel to inmates on death row who lack proper legal representation, many of whom are black. Stevenson covers several trials in the story, but the one given the most focus is that of Walter “Johnny D.” McMillan (Jamie Foxx), a man who has been accused of murder. As Stevenson investigates McMillan’s case, he comes to believe that not only is McMillan innocent, he also believes he is the victim of a racist institution.

Jordan imbues Stevenson with a measured, quiet dignity. He gets several compelling courtroom monologues about the nature of justice, the rule of law, and all the words we expect crusading lawyers to say. But the true strengths of Jordan’s performance come through in his physicality. Stevenson is a polite man, always well-dressed, hardly ever raises his voice, and is an excellent listener. But Jordan gives Stevenson a palpable charisma all the same, he is just as compelling listening to a story as he is in telling one. 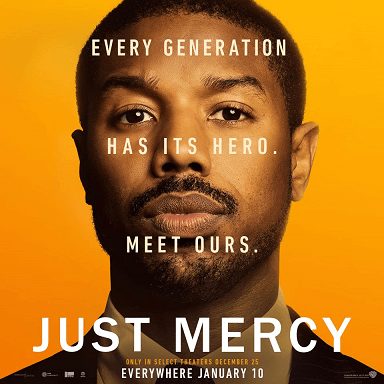 There’s a particular standout scene featuring Stevenson and a felon named Ralph Myers (Tim Blake Nelson). Myers describes a trauma he endured as a child and how it shaped him. Nelson, terrific actor that he is, breathes a heartbreaking authenticity to every line in his speech. Stevenson says almost nothing in the scene, and we instead focus on his reactions to Myers’ story. But even with so few lines, Jordan says so much with his face and posture. His face is a mix of worry, pity, and anger all in one, while his back remains erect and his hands folded in front of him. It’s a great bit of acting all around.

Other standout scenes are those set on death row, largely those featuring Jamie Foxx and Rob Morgan as Johnny D. and Herbert Richardson. Foxx and Morgan play their characters with a mixture of dignity, empathy, and humor. Never once do they ask the audience to pity them, but to understand them. Richardson in particular is a man who never wanted to cause the hurt he caused others. He’s a man who wishes to atone, but also does not want death to take away that possibility of atonement from him.

It’s just a shame that nothing else in the film comes close to matching those scenes, and instead falls all too often into the “inspirational story” mode of most Hollywood movies. The supporting players (Foxx, Brie Larson, et al.) are fine, and give performances that all meet the required levels of a standard feel-good movie, but none of them truly feel like characters. Instead, they feel more like vehicles meant to show off the virtuous nature of Stevenson’s character. Cretton and Andrew Lanham’s screenplay suffers from a similar problem. While we find ourselves rooting for Stevenson and his fight against against racist injustice, the film spends far too much time lavishing praise upon him and his good deeds. On that end, the film nearly chokes on its good intentions and earnestness.

It never gives the audience the opportunity to admire Stevenson’s character on their own. Instead, it needs to make it abundantly obvious over and over again to the point of being exhausting.

Just Mercy tells the story of a man who is a hero in every sense of the term, and is more than ably supported by the actors that populate it. One can’t help but feel, however, that a bit more subtlety would unlock the great film that it wants to be.